RUSH: So you see this stuff is all so predictable. It’s also unoriginal that it is — I don’t know. I’m just speaking for me, folks. It’s difficult, very difficult to get genuinely excited about it, and I’m having to work, concentrate here to avoid being entirely cynical about the process. And I don’t know that I want to get rid of all my cynicism about it because I think some of it clearly is warranted. But let me show you how the conventional wisdom works via audio sound bite and show you how everybody gets into it and plays their role in hyping it and analyzing it and making it seem like it’s one of the most important things happening. I guess what really gets to me.

It’s being hyped as something gravely, tremendously important, and it isn’t. It’s perfunctory. It happens every year. It’s required by the Constitution. Well, it wasn’t originally, but it is now. It’s required. It isn’t any great thing. Obama has to do it. He probably would rather not. It’s not an elective. It’s not something that’s coming up out of the clear blue. This is one of these, “Yeah, I gotta do this, not really crazy about it.” To get all hyped up about it seems to be to fall for the trick. But let’s go. We have a montage and the theme this year in the Drive-By Media is that Obama’s State of the Union speech tonight is actually the kickoff of the Hillary Clinton 2016 presidential campaign.

SABATO: He’s really creating a platform for Hillary Clinton, building a bridge to 2016.

BAXTER: Barack Obama is simply setting up Hillary Clinton’s run for the presidency in 2016.

LERER: Lay out the rationale for his party going into 2016.

HENRY: Setting up the message for Democrats heading into 2016.

PACE: Setting the tone for Democrats heading into 2016.

BORGER: Setting the table for the base of the Democratic Party for Hillary Clinton.

DIONNE: He’s proposing things as part of a legacy, things Democrats, presumably Hillary Clinton, but other Democrats can fight for after he is gone.

RUSH: You see, folks, here’s Larry Sabato, Ted Baxter, Lisa Lerer, Ed Henry, Julie Pace, AP, Gloria Borger, E. J. Dionne Jr., and they all say the same thing. I’m sorry. What’s it take to be in that club? To be able to read instructions on a fax sent from Drive-By central? “Okay, Drive-Byers, here’s the take on Obama’s State of the Union speech tonight. It is a bridge to Hillary’s presidency.” And no matter where you turn in the media, that’s how it’s being portrayed. 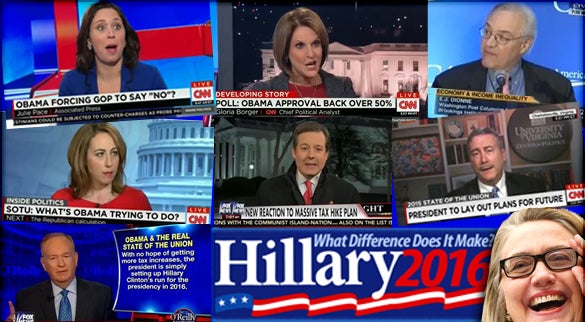 George W. Bush had never done that, and Clinton really, at election time he has interceded, but for the most part most presidents respect this. “Okay, been there, done that, I’m in the past now, new guy’s got his time, go for it.” Not gonna be the case with Obama. But I just find it utterly — not boring or whatever. They’ve all got the same take. Obama setting up Hillary. Is that what you think tonight is, Snerdley, Obama setting up Hillary for the 2016? (interruption) Obama doesn’t care.

How many candidates has Obama tried or helped get elected? That’s right, one, himself. Obama doesn’t care. Now all of a sudden Obama, what a magnanimous guy, State of the Union show tonight’s all about electing the next Democrat. I don’t doubt that it’s about destroying the Republican Party.

RUSH: Didn’t the Democrats, their 2014 midterms that we just had back in November, didn’t the Democrats, at least some of them, run on the whole myth, this misnomer of income inequality and the need for income redistribution? Now, how did that work out for ’em? I mean, they got shellacked. Now, I don’t know how focused they were on that. I know some of their candidates ran on that premise.

I mean, it’s Obama’s premise in the State of the Union show tonight. And now it’s supposed to set Hillary up for 2016? Where does this stuff come from? Who in the world comes up with this and then sends out the fax to everybody in the Drive-Bys, “Okay, this is your take,” and then they all do it. Why would they all want to sound the same anyway?