RUSH: Barry in Virginia Beach, I’m glad you called, sir. Great to have you on the program. Hello.

CALLER: Hi, Rush. First, personal condolences on the passing of an EIB family member and friend.

RUSH: Thank you very much, sir. We appreciate that.

CALLER: Second, you’ve kind of taught us over the years to be positive and optimistic. And I think we’ve got good reason to be. I’m not gonna say who’s the best Republican candidate we’ve got shaping up, but it’s a strong suite that we’re gonna have a choice of. And I’d point out that much of Obama’s legacy can be eliminated by the mere fact that these are all executive orders and don’t have a standing way to, you know, stay around after he’s gone. And unlike other things that are passed by Congress and then signed into law by the president that stay around, his won’t. And so I would think that one of the things that we’d be looking for out of a Republican candidate for president would be somebody that would make this a key part of how they are gonna offer themselves to the electorate, and that is 30 minutes after he leaves the swearing-in ceremony, that he signs an order eliminating all of those executive orders, sir.

RUSH: If I am not mistaken — and I might be today, I’ll admit that I could be making mistakes today, which I will allow myself the permission to make mistakes today, but I’ve been seeing things on this. Now, there’s three things I want to say in response. Number one, you’re right that executive actions are more easily withdrawn than acts of law that have been signed into law by a president, passed duly by Congress. 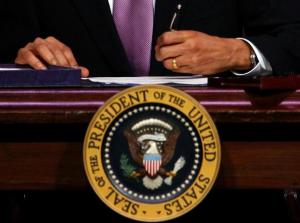 I want to warn everybody about this. I think every Republican presidential candidate had better be aware of this. Whoever wins the Republican nomination and becomes president, maybe, whoever that Republican is, no matter what, Obama and the media are going to — if there’s anything done that tries to unravel anything Obama really cared about, like Obamacare, or executive action on immigration, if any Republican makes the first step toward unwinding any of that, Obama and the media are gonna get in gear, and they are going to set out to destroy this new president even if it is the afternoon of his inauguration where this stuff happens.

Barry, you should be prepared for this to happen. That’s the only reason for an ex-president to hang around town. The third thing is, I know that I read something about this recently and I can’t recall it, about the ease or the difficulty that it actually is unwinding an executive order. You just said that unwinding one of those, unraveling one of those would be easier than legislation, and at first glance, that’s the automatic conclusion. I think I read something where it’s not that easy to do, and it isn’t just as simple as signing a counter-order and that Obama is gonna be hell-bent on making sure that it doesn’t happen.

So you’re right, I think every potential Republican needs to be aware this is what he’s gonna face. It’s not just Obama that’s gonna be trying to stop him. He’s gonna have the entire Washington press corps, as though Obama still is president. All of us in this country better get used to that. I think it may even be the case even if the Democrats win the White House, even if it’s Hillary. Whoever it is, I guarantee, the media and this relationship they have with Obama, I’ve never seen anything like it, and it’s not gonna end when he leaves the White House. They’re not gonna all of a sudden stop protecting Obama and his accomplishments and achievements.

Remember, they’re the history writers, too. Anybody that tries to unravel anything this guy’s done, it is going to be a bloodbath, a political bloodbath. Do not doubt me. And I wish I could remember that story I read — and I may not even have printed it out and have it ready for the program, I read so much. (interruption) Well, yeah, he’s not even signed the executive order on amnesty. He’s doing it by memo. But the story or whatever, it might have been a column I saw, an opinion piece, I can’t recall it off the top of my head right now, and it might have been a leftist Drive-By writing it to discourage me; I just don’t remember. But it was devoted to the idea that unraveling these things is not gonna be easy, not as easy as most everybody thinks that it is going to be. Anyway, Barry, I appreciate the phone call.