He was an intellectual, but was not off-putting.

He was in a stratosphere all by himself, but did not make people who weren’t with him in that stratosphere feel uncomfortable.

It was the most God awful, puke-inducing endorsement you would ever read, and it was totally made up. They couldn’t possibly have known all of this about Obama! Nobody knew anything about him back then, and they didn’t care. He was a blank canvas, and they could make of him what they wanted him to be, and they did. Now they’ve got this editorial today that, when you juxtapose the two, it’s just hilarious. If it weren’t so damn serious, it would be hilarious.

‘Cause here are these liberals on the editorial board at the Washington Post, smarter than everybody else and more caring and all that rotgut stuff, this superiority complex they run around with. They have all of these assumptions, like David Brooks thinking Obama’s gonna be great president because the crease in his slacks. I mean, it’s silly, silly stuff. The Superman characteristics that they attached to Obama? (snorts)

I mean, it was clear that these people were groupies, and they were groupies on a blank slate. They were groupies of an empty suit. Now they are worried. I’m telling you these highfalutin intellectuals who all believe themselves to be foreign policy experts, national security experts, they’re scared to death. They’ve got a guy who doesn’t know what he’s doing or doesn’t care. A lot of it has to do with this prayer breakfast speech, but even before that.

As I say, the half-baked effort to tackle militant Islamic terrorism, to not even properly identify it? They are worried about it. I have to laugh also. You know, when I hear the president worried, and even some of his buddies on the left, worried about Muslim backlash. Ohhhh, yeah. “We’ve gotta be very careful after Charles Hebdo! You know, after some militant Islamists blow up the French magazine, we’ve gotta be very careful that there’s not a backlash against all Muslims,” when there never is.

There never is a backlash against Muslims, particularly in this country. There never is! But at the same time it’s obvious the president has no concern about Christian backlash, and apparently he’s got no concern about Jewish backlash. This is one angry president. I know that he doesn’t appear angry to you, casual observers, but it has to be the case. It could be one of the many things explains all of this.

But this guy is an angry man about many things and many people, and it’s why he bullies people. His anger-and-intimidation schtick exhibit problems. The idea of conflict resolution, as taught in the politically correct classrooms of American liberalism the last 30 years — the idea of conflict resolution — actually conflicts with Obama’s deep-seated need for payback. You know, if I had to choose one word to describe Obama’s presidency, it’s payback.

It’s payback for every grievance he believes this country was founded on, and every grievance he believes this country’s guilty of, like in being a superpower. It’s payback time. It’s time we learned what the rest of the world lives like. It’s time we gave back what we stole — including Mexico, maybe. It is time that we find out what it’s like economically the way the rest of the people in the world live. So the people around the world, he believes, we have caused to live in poverty.

Because we’ve stolen their resources, and we’ve stolen their land or whatever else we did, and they’re poor because of us. Well, here they come being welcomed into the country and every federal benefit that exists is being extended to ’em. Including retroactive Earned Income and Child Tax Credits. You think any of you would be allowed to refile your taxes if you used to not qualify for the EITC and all of a sudden do?

Do you think you’d be able to refile for all the years you weren’t able to qualify for it? No, of course not. The illegals can! (interruption) Well, Tim Geithner, he could do it, but the illegals are being allowed to do it. I mean, what’s Drive-By driving this? Clearly payback. This speech at the prayer breakfast comparing what’s going on today with the Crusades? It’s absurd. It’s obscene. What the president was doing is he says (summarized), “You’ve all used religion to justify murder! 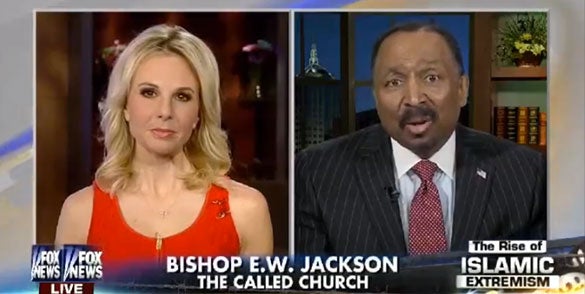 “Hey, hey, hey! You people have done the same thing that we’re witnessing today. This isn’t all that new.” Well, this takes us to audio sound bites. Let’s start here with number five. Bishop E. W. Jackson was on Fox & Friends this morning. Elisabeth Hasselbeck interviewed him, and Hasselbeck said, “What place did Christianity and Christ have in that equation yesterday at the National Prayer Breakfast, Reverend?”

JACKSON: With all due respect to him and to the office: Mr. President, if you don’t want to give terrorists a recruitment tool instead of closing Guantanamo Bay frankly, sir, you ought to close your mouth because you just gave them a gigantic propaganda tool. They called us Crusaders, and you’ve just confirmed it! Mr. President, we’re not on our “high horse.” What we are on is high alert, and the American people would like for once to know that you’re willing to defend Christianity and defend America instead of defending Islam.

RUSH: You don’t hear too many people talking that way, not in public. I mean, you hear them talking this way all the time at the ball game or in the bowling alley or at the grocery store. You do not hear this kind of talk in public. This is the Reverend E. W. Jackson from The Called Church. So next up, Elisabeth Hasselbeck said, “Well, you served in the Marine Corps for three years. You are a veteran. When you talk about propaganda, the only thing propaganda does right now is help recruit for ISIS and strengthen the enemy. For our veterans right now, military personnel, how much more danger did those words of the president’s actually put our service members in?”

JACKSON: He’s given them a gigantic recruitment tool! He’s apologized for America! He’s conjured up the image of Crusaders, and he’s basically justified exactly what Osama Bin Laden was saying. I would remind the president that the Crusades began in 1096 as a response to Islamic aggression, and the fact this they had conquered the Holy Land and they were oppressing eastern Christians. And there was a response to that, so if the president is even gonna cite that as an example, then he ought to get his history complete.

RUSH: He doesn’t care, Reverend, is the point. He doesn’t care. He knows the Drive-Bys aren’t gonna refute him. He knows the Drive-Bys aren’t gonna call him up on it. He just wants it said so it’s out there for consumption by the low-information crowd and others. And, Reverend, if I might add he probably enjoys the fact that people like you and me are so upset about it. That’s, I think, part of his motivation for doing it. One more bite.

Hasselbeck: “You just did something the president won’t do. You used the word ‘Islamic.’ So let me ask you this. Not only did the president not protect Christians — in fact, really go after them, attacking them by stroking the name of Christ yesterday, some would say — but he continued on the path of not calling the enemy what it is, not saying ‘radical Islam.’ Don’t you believe that in not saying that he actually is protecting radical Islam by not calling it out?”

JACKSON: I don’t know how to explain this, but this president does everything he possibly can to defend Islam and does almost nothing to defend the honor of this country. And, yes, once again he’s giving them exactly what they want. And you know, Elisabeth, they’re laughing at us, because all they see it as is a sign of weakness. Pray for our president. I think he’s deeply misguided and confused.

RUSH: I tell you, folks. I have always had… I don’t care whose held the office, I’ve had the highest reverence for the office. One of the things that… Maybe I’m foolish. One of the things I have always believed… No matter the political party of the president, I’ve always believed that the person sitting in that office has as his first objective the defense and protection of this country and the Constitution.

I’ve assumed also that the person sitting in that office and in that chair loves this country. Not to say he doesn’t have problems with it, not to say that perfect. But when I hear sound bites like this, or when I listen ’em myself or when I hear other people talking about Barack Obama, it’s really difficult for me to sometimes come to grips with the fact we’re talking about the president! It’d be one thing if it was just a senator out there saying these things and doing these things.

But we’re talking about the president, as though it’s perfectly normal and understandable that we would have a president who doesn’t have a high regard for this country. It’s just part and parcel. I just can’t come to grips. I just can’t believe that people would have actually elected the guy knowing that they were electing somebody who didn’t hold this country in high regard, and it just seems like it’s par for the course and very common that we’ve got a president elected who says and does things like Obama.

As though that’s nothing really unique or special.

To me it is. I just… You know, I hear Bishop Jackson here talking about, “The president does everything possibly he can to defend Islam and does nothing to defend the honor of this country.” I can’t think of a president we would ever talk about where that would be asserted. Now, I wasn’t alive during Woodrow Wilson, so he’s the last full-fledged… Well, but he was a huge liberal. Don’t misunderstand. Woodrow Wilson a huge liberal. Even FDR, for crying out loud. Nobody would ever mistake FDR for somebody that thought this country had a price to pay for its very existence, like Obama apparently does.