RUSH: This is ABC News out of Chicago. “Do you brew your coffee using those Keurig K-Cups? The man who invented it is ashamed of his achievement. John Sylvan told The Atlantic that he sometimes regrets his invention because it creates too much waste and is bad for the environment. ‘I feel bad sometimes that I ever (invented the K-Cup),’ Sylvan said. ‘I don’t have one. They’re kind of expensive to use. Plus it’s not like drip coffee is tough to make.’

“How expensive? A 12 pack of Folgers K-Cups, for example, sells for about $6.72, giving you about 4 ounces of coffee. In comparison, a 33-ounce container of Folgers Classic Roast Ground Coffee sells for about $8. That’s eight times the amount of coffee for nearly the same price.”

So you see the K-Cup maker is ripping you off all to shreds.

“But most Americans don’t seem to care about the cost or the environmental impact of K-Cups. The Atlantic says K-Cup brewers are now in one in three American homes. ‘It’s like a cigarette for coffee, a single-serve delivery mechanism for an addictive substance,’ Sylvan said.”

Ah, ah, ah, ah. We’ve now learned that coffee’s so good for us. Anyway, it’s just classic. Here we have the inventor who has been overcome with guilt, overcome with guilt over his thoughtless and destructive invention. It never ceases to amaze me. We have one of these. I was gonna bring it in here and actually destroy it on the Dittocam just to show my solidarity with the inventor of the thing.

Do any of you use it? You know, the only time I use it is if I’m first here and the coffee’s not ready. I refuse to make my own coffee. I’ve risen above that, okay? I refuse to make my own coffee, so we got a K-Cup thing in there and if I’m the first to arrive and I just want to make one cup until whoever makes the coffee gets here, that’s when I use it. And you know how often that happens? Maybe once a month.

The first time I ran into a K-Cup machine was at a hotel room in Indianapolis. It wasn’t that long ago, five or six years. I’d never heard of the thing. I thought it was one of the most brilliant inventions ever and we immediately set out to try to secure the guys as an advertiser. We found out they’re a bunch of commie libs, and there was no way. And now we know. (laughing)

Thank God Henry Ford didn’t have this problem. Thank God Steve Jobs never had this problem. Can you imagine if Jobs had said, “Oh, my God, throw away your iPhone. I feel so guilty over inventing the iPhone. It’s nothing but an environmental hazard and disaster.”

I don’t even use it. 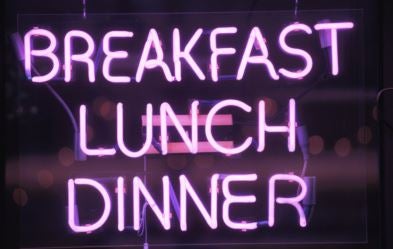 All right, folks. Little did you know, the whole idea, the societal norm, quote, unquote, of eating three meals a day is racist.

“Senior editor at Mother Jones wants you to know that you should stop eating three meals a day for reasons including the fact that it is ‘racist.’ Yes — she actually uses the word ‘racist:’ ‘Dogmatic adherence to mealtimes is anti-science, racist, and might actually be making you sick,’ proclaims the subhead to Kiera ButlerÂ’s Wednesday article, titled ‘Why You Should Stop Eating Breakfast, Lunch, and Dinner.’ Here is her reasoning: When the Europeans –” It’s always their fault. It’s always the fault of the Europeans.

And wait ’til you hear what Calypso Louie said in a sermon the other day to his troops at the Nation of Islam. Actually, it’s not much different than what Obama is doing, but when Calypso Louie talks about it, it sounds much more extreme and dramatic.

Okay, here’s her reasoning. “When the Europeans came over to the United States, they ate three meals a day whereas the Native Americans ate in a less restricted fashion — a practice which Butler claims the Europeans considered to be unrefined.”

So here we have these white Europeans, they show up here in the New World, which is just fine, it’s pristine. You have the Native Americans, the Indians, and they are at one with nature, and they aren’t doing anything except killing each other now and then. And they’re abusing the buffalo, but we don’t talk about that. Had there been elephants here they would have been abused the elephants to boot, but the elephants hadn’t arrived here yet because Ringling Bros. hadn’t brought ’em over.

So it was just the Native Americans, just the Indians, and they were flawless, they were perfect, they were just the absolute perfect inhabitants of the New World. And here came Columbus and da Gama and all of these evil white devils, and they brought with ’em a bunch of sordid habits, a bunch of destructive traditions, all encapsulated in racism. So when the Europeans came to the US they ate three meals a day and they looked at the Native Americans eating only when they felt like it, and they thought that was unsophisticated, and they thought that was unrefined. And they thought, “My God, this place is inhabited by a bunch of savages, so we’re gonna have to bring ’em in to the New World.” 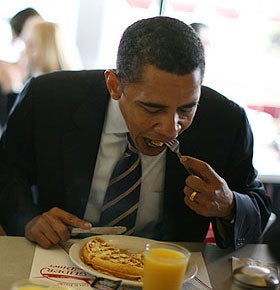 “Kiera Butler offered excerpts of an email interview with Abigail Carroll, author of the book Three Squares: The Invention of the American Meal, as proof of this point. ‘The eating schedule of the native tribes –‘” Remember, now, those who were entitled to be here. They were perfect. They were of color, they were pristine, and they didn’t destroy anything. I mean, they were just ideal. And so, “The eating schedule of the native tribes was less rigid Â… the Europeans took this as ‘evidence that natives were uncivilized.'” This is in an e-mail from this Abigail Carroll to the writer of The Atlantic story named Kiera Butler.

“She said that Carroll told her that the Europeans believed that ‘civilized people ate properly and boundaried their eating, thus differentiating themselves from the animal kingdom, where grazing is the norm.'” See how this all plays out now? The white Europeans, a bunch of superiorists. The white Europeans, a bunch of elitists. They came over here and what’d they do? They immediately began judging what they found. And as they began judging, they began to be critical of what they found, and this is when the roots of all modern evil began.

“So, basically — if you organize your eating around breakfast, lunch and dinner, you are perpetuating the racist belief that Native Americans are savage animals.” You are perpetuating the racist idea that Native Americans are savage animals. That is in The Atlantic. It’s not in some cockeyed, kooky, obscure publication. It’s a mainstream publication. It’s gonna be cited by some college professor, or a series of ’em, and you’re gonna have people running around actually articulating this. They’re gonna end up believing it, and it’s gonna become yet another indictment of white Europeans and therefore the information will be used to discredit the entire discovery, meme, and narrative of the New World.