RUSH: Chris in Port Mansfield, Texas. It’s great to have you.

CALLER: Hi. Thanks for taking my call.

CALLER: I was watching Fox News, and I usually watch the O’Reilly Report, and I noticed the other night they’re all talking about that Geller woman that had the Draw Mohammed thing going on.

CALLER: And Bill O’Reilly was saying that he defends her right to say it, but she shouldn’t have done it because I guess she was rude. And even Juan Williams went almost to the point of saying that it was bordering on hate speech, and the only reason she was doing it was to promote herself. And I just wanted to say, it’s been said by others, of course, the only freedoms you have are the ones you can defend. And the think piece that goes with that is, if you don’t exercise your freedom, do you really have it? So I think this Geller woman is not — I mean this woman is wonderful. She should be heralded, not chastised by saying she’s rude or whatever. I just wanted to give you something to think about there.

That line of thought is taken by conservatives who want to show liberals that they’re reasonable and that they’re not part of the right-wing wacko kook fringe, which many of the so-called conservative media types consider mainstream conservatism to be. It’s an opportunity for people in the 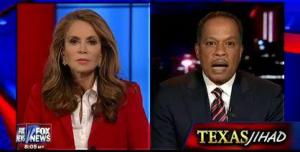 New York-Boston corridor, conservatives, to tell their liberal buddies, “Hey, I’m not like that wacko. You can invite me to your party. I mean, you can think of me as reasonable. I’m not like them.”

That’s why this stuff is being said about Pam Geller. Because to misstate what she’s doing and what her purpose is, like that, I mean, that’s done purposely. It’s not hard to understand what Pam Geller is doing. In fact, since you mentioned Fox, last night something happened on Fox that I got a bunch of notes about. There’s a liberal female named Julia Roginsky that appears to Fox now and then, and she had to admit last night, pained though she was, she had to admit that I had a really good point when I observed that if we are going to condemn ourselves for drawing cartoons of the prophet because that offends Islam, then why do we continue to offend them by flaunting and flouting gay marriage and gay rights?

RUSH: All right, here’s the sound bite. Let me first play what I said on this program Wednesday. They replayed this on The Five on Fox yesterday.

RUSH ARCHIVE: The same militant Islamists who do not permit the drawing of pictures of the prophet Mohammed also do not permit homosexuality. If you turn on MSNBC, you’re gonna see a total devotion to the concept of gay marriage. Isn’t that insulting to the Muslims who would be watching?

RUSH: That’s a brilliant question, folks, and I have posed that question all week long. I mean, we go out of our way to act like we shouldn’t draw these pictures of Mohammed. We shouldn’t have these contests because Muslims say they’re offended. You ever seen what they do to gay people? You ever seen what happens? Do you know about gay marriage in these countries? It doesn’t exist. And yet we put that in their faces every day in this country. Why don’t we worry about that? So they discussed it on The Five. Julia Roginsky, a former Clinton operative, and it was Melissa Francis, Kimberly Guilfoyle, and Greg Gutfeld.

ROGINSKY: I agree with Pamela Geller. She’s got a disgusting message, but I agree that she has the right to say —

FRANCIS: And you agree with Rush Limbaugh? I mean, this fight has made some pretty interesting bedfellows.

ROGINSKY: Let me tell you something. The most depressing about this is that I agreed with Rush Limbaugh today.

GUTFELD: No, that means you’re growing.

RUSH: Evolving. They’re all talking at the same time. Were you able to hear all of that, Snerdley? One of the most depressing things that ever happened to Julia Roginsky, she had to agree with me. I’m kind of shocked. I didn’t think anybody would agree with that. I mean, if you’re gonna get called to action over these cartoons, and if you’re gonna do everything you can to stop these cartoons from being drawn and published and if you agree that bragging about it and touting and promoting gay marriage does same thing, well, then what are called on to do? Shut up about it, which I frankly don’t see as happening.