Comedian on Comedy Network Complains About a Guy Telling Jokes

RUSH: Speaking of narratives, let me ask you people a question. Do you recall first ladies being criticized or laughed at, ridiculed, or made fun of before Hillary Clinton? (interruption) Do any of you recall Nancy Reagan being laughed at and made fun of? (interruption) You do? What was she laughed at for? (interruption) Okay. That’s exactly right. You know, you are exactly right. When Nancy Reagan came out and said “Just say no” as a policy for drug abuse, the media mocked her, the Democrat Party mocked her, called her a simpleton, said that certainly wouldn’t work. “What do you mean, ‘Just say no’?”

I remember that campaign. You had NFL players doing PSAs all over the country, “Just say no to drugs,” that kind of stuff. And then when Nancy Reagan redesigned the White House china, that would be the plates and the cups and saucers, for those of you in Rio Linda, oh, they had a field day with that, didn’t they? You would have thought the world was gonna come to an end. Nancy Reagan, there she was, typical, evil, rich white woman totally out of touch with the people of this country, making a big deal, maybe even did a little TV segment, on redesigning the White House china.

And then, when they learned that Nancy Reagan consulted an astrologer, oh, did they have field day with that. Sam Donaldson and ABC News and the rest of the Drive-By Media just went to town with Nancy Reagan. Were there any people making fun of Barbara Bush? I remember editorial cartoons about Barbara Bush and her white hair and her age, looks like the president’s mother. I remember several in the Drive-By Media, cartoonists and editorial panelists saying this.

And then of course there was Betty Ford prior to all of that, and you can remember the kind of things that were said about Betty Ford. I don’t know how old you are, but if you want to go back, I mean, Lady Bird Johnson had her share of people that made fun of her. Made fun of her hair, made fun of her daughters. They never made fun of her husband ’cause they’re scared to death of him. They did get on him once when he grabbed his two beagles by the ears and held ’em up and accused him of animal cruelty. He said, “No, this is just the way you have to treat the Republicans in the Senate,” and everybody applauded.

So, anyway, there’s a rich tradition, a rich history in America of the media going after — I mean, I just said Hillary for a reason. But they went after Laura Bush as well, if you recall. Laura Bush, they went after her mercilessly on the basis of what an idiot she had to be to marry W. in the first place. Well, listen to this. This is last night. They had a roundtable discussion on Comedy Central. The Nightly Show with Larry Wilmore. Is this the guy that took over for Colbert? Anyway, roundtable discussion about criticism of Moochelle (My Belle) Obama and her speech at Tuskegee and the host Larry Wilmore said… 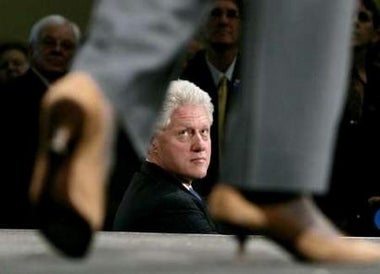 WILMORE: I’ve seen the way people treat FLOTUS over the years. Nancy Reagan, she got some jiving, but some was that astrology stuff. It seemed like it was all in fun. Barbara Bush, maybe the George Washington jokes, they said she looked like her, but that was about it, right? Everybody like Barbara Bush, you know, seemed like a really nice lady. But when Hillary — when the Clintons came in, that’s when I first heard like vile comments. I remember Rush Limbaugh saying she had fat ankles or something like that. I think there’s a lot of sexism in here. You know, we talk about the racism; there’s lot of sexism here, too.

No, here’s the thing. One thing they’re right about: Nobody made fun of liberals. Nobody told jokes about liberals until I came along. They are right about that. And that’s what they can’t handle. That’s what they can’t deal with. They can make jokes, they can ridicule, they can impugn, they can character assassinate us all they want and it’s yuk yuk time and they’ll win awards and all that. But you let one of us come along and tell jokes about them, oh, and especially their heroes and heroines, man’s fighting words.

I did a lot more than make fun of Hillary Clinton. I mean, our approach to Hillary Clinton 99.7% of the time, substance. Hillarycare, the vast right-wing conspiracy, blew that to smithereens. The travel office, Whitewater, Travelgate, every one of these things, billing records, her stupid bus tour that we blew up, grand jury testimony, oh, yeah, we did a lot of really creative, the kind of thing that liberals win awards for on comedy shows, we did about Hillary.

It’s not permitted when you make fun-of-them. No, no, no, no, no. Nobody makes fun of liberals. Liberals are too important. Liberals are too serious. And that’s what really bugs them. Two things about me I think really bug ’em. A, I’m right. Make fun of them, not tolerated, impermissible, and I sound so confident and sure of myself when I do it. And that is off-putting.

RUSH: Hillary, by the way, just to be… Isn’t it funny that a bunch of comedians on a comedy show, on a comedy network, are complaining about a guy telling jokes? If that doesn’t say it all! You’re just not supposed to make fun of liberals, and they had no experience with that when I came along and didn’t quite know how to deal with it. And they’re still offended by it.

They’re still bugged by it, obviously. But I don’t ever recall even using the word “cankles.” I had an entirely different term for it, by the way, folks. “Elephantiasis.” But I didn’t… I looked it up. The word “cankles” is even in the Oxford Dictionary. It’s not a new word. It’s something that was… It wasn’t created for Hillary by any means. But, anyway, she was not just FLOTUS. She was co-president.

She was positioned that way.

She was promoted that way.

She was supposed to be the co-president.

She wasn’t just the first lady. “Buy one, get one free.”