Trump Supporter: Read The Art of the Deal to Understand What He’s Doing

RUSH: George, Kingwood, Texas. Sir, great to have you with us. Hi.

RUSH: Thank you much.

CALLER: — and it’s what he wrote in The Art of the Deal.

RUSH: This is fabulous.

CALLER: What he’s leading with is a bombastic offer.

RUSH: This is absolutely great. George, thank you. Thank you very much. I appreciate the service that you just performed. Let me explain to you what it is. George here is a Trump supporter. You know what that means? George supports Trump. George has undertaken to understand as much about Trump as he can. One of the things he’s done is he’s read Trump’s book called The Art of the Deal. What does Trump talk about constantly in this campaign?

He’s gonna do great deals. We got stupid leaders doing bad deals, doing dumb deals, but he’s gonna do the best deals this country’s ever had made. He’s the best dealmaker; he’s the best negotiator. And everybody just sits around and goes, “What a braggart. What a bunch of bombast.” And they either laugh at it or they condemn it or what have you. But old George here probably knows something that most in the establishment, the ruling class, don’t know, because they haven’t read Trump’s book.

They wouldn’t stoop to such depths!

Right in The Art of the Deal Trump says, if you’re serious in a negotiation about wanting something — and, by the way, being serious is the only time to enter into it — and if there’s something dead certain you’ve gotta have, you have got to start out with the most outrageous position. The opener has got to be so outrageous that the compromise is exactly what you want. The opener is the most outrageous demand that you can make. So what old George is doing here is extrapolating Trump’s negotiating skills and his technique with his political statements.

And old George here is convinced that Trump isn’t really gonna deport every Muslim, and he really isn’t gonna keep every Muslim outta here. But he thinks Trump wants to wake everybody up. He thinks Trump does have some pretty serious ideas, and to get there, he’s gotta start out with one of these outrageous things. So that when Trump backs off of it is when he appears reasonable, which is when you can finally make the deal with him. It’s a strategy.

Trump is bringing his business acumen to politics. That’s something that politicians don’t have: business acumen, many of them. And so they don’t recognize it, and they don’t understand it. So what would be the manifestation of this? How would this manifest? Okay. Well, let’s go back and remember when Trump said that he’s gonna deport every Mexican. Every illegal Mexican that’s here is gonna get sent back. “They’ve gotta go,” he keeps saying. “They’ve gotta go back. They gotta go back.” 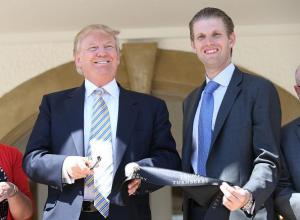 His own son, Eric Trump, said just yesterday or the day before, “My dad believes in amnesty if it’s earned. Once they’re sent home, they can come back if they’ll do so legally.” That’s what his own son says the plan is. Trump hasn’t said it. Well, maybe he even has, in certain ways. The point is that all of this bombast and all of this outrageousness is owning the media. It is shaping the media day. The media day is being determined by what Trump is saying, where Trump is, what people’s reactions to Trump are. He owns it.

As you just heard, more coverage than the entire Democrat presidential campaign, all those candidates combined. He has over twice the amount of news coverage that the media’s own candidate, Hillary Clinton, is getting. And this is why I’ve been dancing around the edges of this theory I’ve been working on since late last week about the phenomenon of this campaign is that Trump owns the media and it’s the media following along like puppy dogs. And wherever he goes, they are there. And whatever he says, they cover it. And the more out…

As far as he’s concerned, the more outrageous, the better. It calls attention to the point that he’s making, and he ends up being the only person occupying his position. He’s got no competition. Everybody else — everybody — is saying the exact the same thing, but none of them are saying what Trump is saying. So just in a political sense here, as I sit back literally objectively watch this rather than get all bent out of shape and emotionally attached to all this and just sit here and study it, it is literally fascinating. I have never seen anybody own the media like this.

Bill Clinton did not own the media like this.

And when they media figures this out, the real fun thing to watch is going to be whether or not they can change the way they’re covering Trump. But I don’t think so, folks. You know why? They need his voters as audience. His support base is so huge, the cable networks want as much Trump as they can get. Forget their ratings. Forget what they think about what he’s saying. Forget their outrage. Forget the fact that they can’t believe somebody actually believes this kind of thing. Just as long as he’s saying it on their network.

The thing they fear most is Trump’s voters not watching. Trump’s audience may be bigger than… There’s no question it’s bigger than CNN’s. The number of people supporting Donald Trump dwarf the total audience of CNN, for example. Just last night on Fox, Greta Van Susteren turned her show over to a Trump personal appearance where this whole Muslim thing is being discussed. It’s a ratings goldmine. It’s ratings gold. Literally, Donald Trump has these people palm of his hand.

As I say, those of you in this audience who’ve been angry and frustrated and think the media is our biggest enemy and the biggest obstacle, here’s somebody showing you that it’s possible to neuter them. And by saying “neuter them,” they’re not supporting Trump, and they have not changed their hatred for Trump. But the fact is, it isn’t mattering. They cannot harm his support. They can’t take him out. They can take anybody else they want to. They can destroy any of these other candidates any day they decide to, and everybody in the game knows they can. 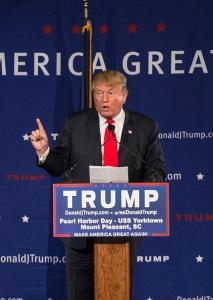 And that’s why everybody defers to ’em, Republicans and Democrats alike. The Republican establishment has been sitting around here waiting for the media to do its dirty work for ’em. And the media’s been trying, except the media unwittingly has been promoting Trump and amplifying his message. All of this supposed outrageous stuff that he’s saying? They’re making it even bigger. They are taking it to an even wider audience.

And it’s costing Trump what? Zero. And here’s a Trump supporter, a caller, who understands what’s going on. (laughing) “Hey, Rush it’s just The Art of Deal! Read the book. This is his outrageous, bombastic opening position. It’s all part of a negotiation.” Trump’s supporters know. They’re in on the gag or in on the deal, whatever it is.