RUSH: Yesterday in the Las Vegas Review-Journal website, the newspaper out there. They released a video of an interview they did with Jeb, and this is one of the excerpts. It’s just 16 seconds of Jeb on Trump.

JEB: He’s not a serious person. He’s a masterful politician. He… As I’ve described it, he uses dog whistle language to divide the country. I cannot imagine Donald Trump becoming president because he would never win. He would never win. Hillary Clinton would clean him.

RUSH: Yeah, I… Here again, you know, they’re making this kind of easy for me. The guy that’s beating everybody can’t win, is what they’re saying. The guy with 3% says this guy at 41% can’t win, implying that he can. If Trump can’t win, why can’t any of you guys beat him? What it is, again… I don’t mean to overdo this. But common sense. And dividing people? Would one of you in the Republican establishment ever just once say it about Obama so that we can at least applaud you one time?

Because if you want to know who’s really dividing this country, look no further than the White House. Because that’s where all the division in this country’s coming from. You people in the Washington establishment are gonna have to understand something. The people outside the establishment are not dividing anything. The country is already divided, and people are trying to put it back together here. And they are a bunch of patriots who love their country. They are not racists, sexists, bigots, the usual isms that you people you people in the establishment throw out to people you don’t understand.

All of this is happening rooted in love of country, love of this nation’s founding, of its traditions, of its values, and the ever-present reality that we have an administration that’s trying to get rid of all of those and transform this country into something it was never intended to be. And to that extent, if somebody’s gonna divide people trying to save the country, then I say, “Let’s all stand for division.” But this country not being unified? Donald Trump’s had nothing to do with that. Neither has any other Republican candidate for president. It’s all at 1600 Pennsylvania Avenue. 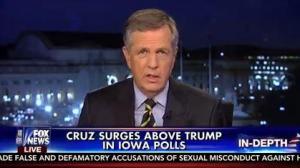 HUME: It is now clear that Ted Cruz, as many of us suspected he would, is having his moment. Leading in recent Iowa polls, this is a product of a well-financed and shrewdly managed campaign and of a candidate who may be the smartest in the field and possibly also the fastest on his feet. But his rise in the polls will put him in the spotlight. Iowa voters will have the holidays and all of January to ponder why Cruz is so disliked by his Senate colleagues. The question then will be this: will they still feel the same way about him when they find out.

RUSH: Wow. Okay, so you Iowa voters, you have about a month to find out why all the people in Washington hate Cruz. He’s the smartest, he’s shrewdly managed his campaign, maybe the smartest in the field, possibly the fastest on his feet, and his rise in the polls we predicted, but he’s hated. And in Iowa, you’ve got a month to learn what we know inside the Beltway, why Cruz is hated.

The number one guy, Donald Trump, cannot beat Hillary, and therefore he shouldn’t get the nomination, ’cause the guys at five and six and three percent apparently can beat Hillary. You do the math and explain it to me. And now Ted Cruz, the smartest, the shrewdest, the fastest on his feet, well, he can’t win because he’s hated by the US Senate. That to me is a resume enhancement.

RUSH: Here is Patrick in Palm Coast, Florida, as we zoom back to the phones. Hi, Patrick. Hello.

CALLER: Hi, Rush. You’re the teacher and I am the student, sir.

CALLER: Okay. I just… From your teachings, I know exactly how Trump is gonna be beat Hillary in the general election.

RUSH: Now, let me stop you here a minute, ’cause I want to say something and I got time dwindling, number one.

RUSH: But you are possibly on to something, and I have been threatening to discuss this. Snerdley will confirm this. I have been threatening to discuss this for a couple of weeks now. I’ve asked them to remind me. You wanted to talk about this idea of Trump can’t win the presidency, can’t beat Hillary. What I actually think, folks, about this… I’m still formulating it. But Trump’s numbers right now, even if they are confined to Republican primary, they’re bigger than Reagan’s were. They’re bigger than George H.W. Bush following Reagan.

And I think the order of fear, the level, the intensity of the fear that the entire establishment has of this guy… Fear always tells us something, and I have never… It’s conventional wisdom that Trump can’t win. Yet nobody on the Republican side can beat him, and it’s assumed that anybody else but Trump can beat Hillary. Where is the logic again? There’s no common sense in that. So I think Patrick may be onto something. We’ll never know until it actually happens, but he may be on to something there.