You Want to See How Much the Mainstream Media Hates Ted Cruz?

RUSH: I have just been made aware of something I want to share with you here, but I can’t find the remote control for the Dittocam, so I cannot zoom in on this. But I’m still gonna show it to you anyway because speaking of Ted Cruz… I was talking in the last hour about how much the media hates Cruz, how much they hate Trump, how they hope Trump takes Cruz out and vice-versa, how they hope talk radio takes Trump out. They’ve tried; they’ve failed.

In fact, they’ve done everything they can to destroy the reputations of every Republican, and particularly Republican conservative, they can, and it’s ongoing and never ending. And just to show you, just to illustrate how much the mainstream hate Ted Cruz, a Newsweek reporter has tweeted that Ted Cruz “has a strong ground game in Iowa,” and he included a photo to illustrate the strong ground game that Ted Cruz has in Iowa. And I want to show it. His name is Alexander Nazaryan, a Newsweek reporter.

I can’t zoom in. I’m sorry. We can’t find the remote control. It’s the usual excuse: “The cleaning crew did something with it.” Let me hold it up there for you. What you’re looking at is a Nazi parade with swastika Nazi flags. I’m sorry I can’t… Maybe I can lean in a little closer like that. That is what he tweeted. For those of you that don’t have a Dittocam, we’ll put this up at RushLimbaugh.com as its own post and you’ll be able to see it there. “Ted Cruz has a strong ground game in Iowa,” the tweet says, complete with a picture of a Nazi parade, a couple of Nazi flags leading the parade.

Now, the tweet has since been deleted, called back. Sorry, we’ve cached it. We know it. We’ve maintained it, kept a copy of it here, because this… Why did Mr. Nazaryan take it down? What’s the point of that, or what kind of apology are we gonna get? “I’m sorry if it offended anybody. I didn’t mean to offend anybody.” Or is it gonna be, “It’s not who I am. I am terribly sorry. It was a really, really weak attempt at humor,” or whatever blah-blah apology. But whatever apology we get is transparent and phony. 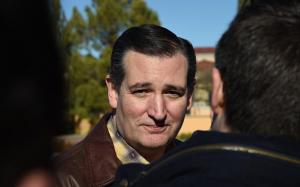 This is what they think, and this is a shining example of… Call it bias, prejudice, whatever, this is what they think. This is who they think Ted Cruz and his supporters are. They really do. They think they’re trying to be funny with this. But there will not be any punishment; there will not be any admonition. I mean, Newsweek may issue some statement here that they regret that it happened, but nothing is gonna happen to Mr. Nazaryan.

And privately he’s gonna be hailed and applauded and feted and celebrated for having the guts to show everybody who Cruz is really all about. Privately he’ll receive accolades and pats on the back for having the courage to do this, ’cause this is what they think. Here, let me show it to you again. That tweet, since deleted, since recalled by the tweeter, is a Newsweek reporter with a Nazi parade, a couple Nazi flags, “Ted Cruz has a strong ground game in Iowa.”