RUSH: Donald Trump goes to Vermont, and the Drive-Bys are shocked. You know what? It’s amazing. How many times (you can’t even count them anymore) has Trump gone out, done a personal appearance, and there are lines. There are thousands of people inside whatever arena Trump is using. There are lines outside. And it’s as though the Drive-Bys have never seen it before because what they saw in Vermont last night, they can’t believe it. Jonathan Karl ABC News cannot believe what he saw. He cannot believe people are actually standing in line to get into a Trump event.

He can’t believe that there were more people outside wanting to get in than there was room for inside. He did a whole special report on it. We have the audio sound bites coming up. And then the Drive-Bys are fit to be tied over the way Trump dealt with hecklers last night, and they’re only reporting half the story. They’re focused on the fact that Trump made everybody show up last night swear a loyalty oath, meaning he’s not gonna let ’em in unless they promise to vote for him. The Drive-Bys say, “You can’t do that! That’s absurd,” forgetting the fact that Hillary Clinton did the exact same thing in Cleveland, Ohio, not long ago. 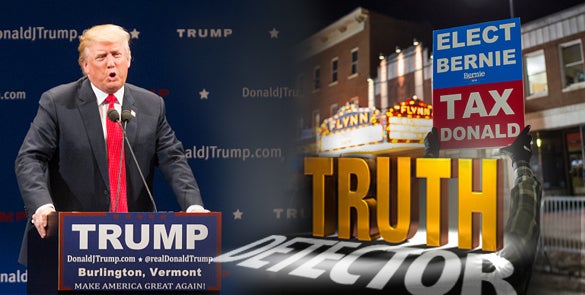 This is a little aside. I remember Hillary Clinton demanding people showing up at one of her events in Cleveland (it was back in September) actually sign a pledge to vote for her. And then, the Drive-Bys didn’t think anything of it. But they can’t abide Trump doing it. And then, of course, there were some hecklers, and Trump dealt with the hecklers in a way that the Drive-Bys disapprove of. Trump said, “Kick ’em out. It’s 10 degrees outside. Don’t give ’em their coats. Just keep their coats and send ’em out there. Kick ’em out of here.”

What the Drive-Bys are not telling you (and you probably know it by now) is that Bernie Sanders and his campaign planned all of these hecklers and disrupters. There was a strategic plan to disrupt Trump’s appearance last night by the Bernie Sanders campaign. And who knows? Maybe old Bern himself was involved in it. So Trump gets wind of it, and he’s not going to let it happen. The protesters start protesting, start heckling, and Trump kicks ’em out. Which is standard operating procedure. Look, just like the Constitution’s not a suicide pact, neither is the First Amendment.

Just because people have a right to speak doesn’t mean you have to turn your event over to them and have them destroy it. Kick ’em out of there. They’re really mad that Trump had no compassion. “He wanted to kick ’em out without their coats!” Wait a minute. Wait a minute. Wait a minute. These are all Bernie Sanders supporters. That means they’re big socialists, and it’s clear that there are people in Vermont that don’t even have a coat. So send those people out there, hold their coats, and give their coats to the poor in Burlington or wherever else in Vermont that you want to — and “spread the wealth around” that way.

I don’t think it would have gone over, which would have been a great illustration. 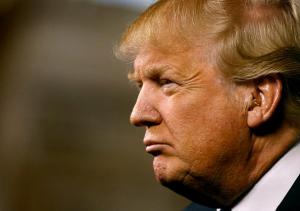 RUSH: To Trump. Rudy Giuliani made an observation that is right on the money. It’s nothing you haven’t thought, but Rudy said it. He said it publicly yesterday. He said that Donald Trump has handled the Clinton family accusations of sexism in a “politically brilliant” fashion. Giuliani said Trump “found a way to do it that nobody else has done it.” He was referring to Trump’s feud with Bill Clinton and Hillary on the whole idea of Bill Clinton’s sexism, misogyny, predatory behavior toward women. Hillary defending it, propping it up, attacking the women who came forward to say that Bill Clinton had abused them.

Rudy’s making the point that nobody’s had the guts to go after the Clintons on this, certainly not in the media, and Republican candidates have kind of tiptoed around ever since the impeachment probations bombed out. The Clintons have had a free road on this, and they had a free reign on it actually before that. And what Rudy is pointing out here is that Trump is the first guy to actually go after it and make it pay off. He said Hillary “attacked him as a sexist, he said, ‘I’m a sexist? What about you standing by while your husband was doing all of that stuff with all of those women and you were destroying their reputations? …

“And you’re accusing me of sexism?’ That’s a brilliant political maneuver.” Rudy said, “‘Nobody has been able to carry that off.’ Giuliani also predicted that Trump is becoming the GOP’s 2016 presidential nominee if he converts his popularity into voters. ‘Unless you don’t read the newspapers you have to make him the favorite,'” Rudy said. “‘I think the real answer to all of our questions are going to come in Iowa, New Hampshire, and maybe South Carolina. Does this sentiment turn into a vote? Is it celebrity, or is it real voting? If it’s real voting, then he’s on his way to the nomination.'” Well, that takes us to Vermont and the Trump event in Bernie Sanders’ backyard.

You know, they have counties in Vermont, too. Did you know that? Somebody should tell Obama they have counties there. And there’s an overflow crowd outside, too big to get in. Some hecklers did get in. It turns out they were strategic. They were bought and paid for by the Bernie Sanders campaign, and Trump found out about it. They started heckling, and Trump zeroed in on ’em and had ’em thrown out and then told the security people (paraphrased), “Don’t give ’em their coats. It’s 10 degrees below outside. Throw them out without their coats. Screw them!”

People said, “How can you be so mean? They’re simply practicing the time-honored right of dissent.”

The audience is cheering, and the media can’t believe it. Here’s Jonathan Karl. Now, this is, to me, a little bit surprising. The fact that people line up outside the venue where Trump speaks is not news. It happens everywhere Trump goes. No matter what the arena. If the arena is 4,000 people, 2,000, 10,000, 8,000 people, there are people lined up outside who can’t get in. It isn’t news. But Jonathan Karl, apparently it was news to him. Last night ABC’s World News Tonight, Jonathan Karl’s report on Trump’s campaign event in Burlington, Vermont.

KARL: Here in Vermont, Trump phenomenon was on vivid display. The rally is in a theater down there. It doesn’t start for another four hours (giggles), but as you can see there’s already a line of people here as far as eye can see extending for at least two more blocks! This is one of the most liberal cities in America, a place that first elected Bernie Sanders. But out here, today, almost looked like Trump territory.

TRUMP: Get him out. Get him out. Confiscate his coat. You know, it’s about 10 degrees below zero outside. Come on, security. Move faster. We need security that moves fast. Come on, move faster! Pretty soon they’re gonna get so nasty that we’re not gonna have any more protesting. You know that, right?

And the reason they don’t, goes back to the thing that I have always pointed out, and that is that Trump and his audience have a bond that the media can’t understand. Much less can they destroy it. The media did not make Donald Trump. Therefore, the media can’t destroy him. The media can’t break the bond. Only Trump can do that. They can’t. But they’re behaving with this age-old playbook that says if they want to take somebody out, they can. That’s Journalism 101. That’s how you climb the ladder in journalism is destroy somebody. And they’re trying every technique that every J-school professor’s ever taught ’em or every editor’s every taught them.

They’re trying everything they know.

They have yet to turn a Trump supporter away from Trump, and yet they keep trying the same old way.

CALLER: Thank you, Rush. I’m a white, blue-collar, conservative union member, and I’m voting for Donald Trump if I have to write him in on Election Day. My differences between the Democrats and the Republicans are irreconcilable. There’s nothing that the establishment, non-producing class can do to cause me to vote for them ever again.

RUSH: Let me ask you this quickly before I have to go: Is there anything Trump could do to lose your support?

RUSH: (laughing) Yeah. (laughing) Good answer. I set myself up for that. There you have it. I don’t know how big of an example that is, but it makes my point that Trump has a bond with his voters and supporters out there that I don’t think your average political consultant or even candidate understands. I don’t think they understand the bond, and they don’t know how to deal with it as such. Thank you, Paul.