Flashback: Ryan Stands Up to Obama

RUSH: We went back to the Grooveyard of forgotten sound bites to find Paul Ryan, and we’ve got these, and I want you to hear them. February 25th, 2010. This was a health care reform submit at Blair House, which is on the grounds of the White House. It is the White House guesthouse, essentially, and occasionally guests stay there overnight, foreign dignitaries. But sometimes they use it for ceremonial-type things or meetings. This was before Obamacare became law, and in the midst of the debate. There hadn’t been any votes on it yet.

And Obama was conducting one of these nationwide extravaganzas to extol the virtues of it all, and he made the mistake of inviting the Republican leadership up there and they sent Paul Ryan, who was the resident budget expert and (at the time) one of the most doctrinaire conservatives in the House. And here are two sound bites. What we don’t have here is video, and Obama was just shooting him daggers. Obama was staring at him. He was as angry as I saw him during that pep rally for guns control or whatever it was that he did Tuesday. And remember he was mad! This is when he cried, had that tear trickling. He was just livid.

Well, he was just staring daggers at Paul Ryan during these two sound bites.

RYAN: This is a Ponzi scheme that would make Bernie Madoff proud. When you take a look at the Medicare cuts, what this bill essentially does is it treats Medicare like a piggy bank. It raids a half a trillion dollars out of Medicare not to shore up Medicare solvency but to spend on this new government program. When you strip out the double counting and what I would call these gimmicks the full ten-year cost of this bill has a $460 billion deficit. The second ten-year cost of this bill has a $1.4 trillion deficit. Hiding spending does not reduce spending. And so when you take a look all of this it just doesn’t add up. 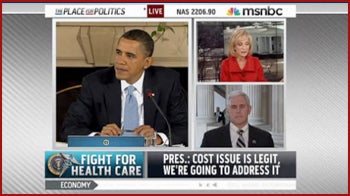 RUSH: No. It doesn’t add up. Now, he was going at it from the financial aspect. He wasn’t, in these bites, talking about the merits of socialized medicine or national health care, but he’s clearly opposed to it. This was… In fact, I remember this moment. It ended up being a false promise, but this is when it looked to me like the Republicans were actually gonna stand up and oppose this. Now, they never had the votes to stop it at this time. In the first two years of the Regime, the Democrats outnumbered ’em — veto outnumbered ’em — in both the House and Senate.

The Republicans, if they had everybody voting together, didn’t have the votes to stop anything. And that’s why there are no Republican votes for Obamacare, no Republican fingerprints on it whatsoever. But it was during this summit in February 2010 that I actually thought the Republicans might stop it. And this before the midterms. This is just basically Obama’s been in office one year. I really thought this signaled the moment where the Republicans had gone through the first year, the honeymoon phase, and they were gonna really stand up and oppose this guy. 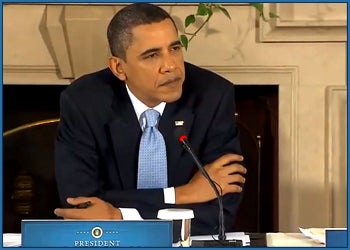 RYAN: We’ve been talking about how much we agree on different issues but there really is a difference between us and it’s basically this. We don’t think the government should be in control of all of this. We want people to be in control, and that, at the end of the day, is the big difference. We are all representatives of the American people. We all do town hall meetings. We all talk to our constituents. And I’ve gotta tell you, the American people are engaged. And if you think they want a government takeover of health care, I would respectfully submit you’re not listening to them.

RUSH: And promptly the Republican leadership abandoned Ryan. And Obama was staring daggers at him during this. And when I say they abandoned him, I’m not exaggerating by much. He didn’t get a lot of support when this was over. He wasn’t exactly thrown overboard, or thrown under the bus, but nobody picked up the clarion call, and it was a huge disappointment. He really stuck his neck out.

Nobody thought anything like this was gonna happen. This was a summit; it was designed promote unity or what have you. And this was like a gift from God that Ryan went up there and staked out this position. And when it was over, very few, if any (if my memory is right) Republicans picked up the challenge and carried the ball and ran with it. And we could look back on it as a missed opportunity.