RUSH: There’s an audio sound bite I want you to hear. Now, last night Trump had his victories, a big one in Michigan. And he was scheduled to do another victory press conference, not a victory speech, but a victory press conference with many of the audience consisting of members of the golf club in Jupiter where the event was held. And, as the media noted long before it began, the podium was flanked by samples of Trump products.

There was Trump water. There was Trump Steaks. There was Trump wine. There were other Trump things there. They were obviously there as placeholders. But I think it was used to refute Mitt Romney’s claims that all of those Trump businesses have gone belly up or kaput. And Trump, as he says, you hit me, I’m gonna hit you back, and so it was time to hit back on these allegations that his businesses are either underwater, bankrupt, broke, or what have you. It was a one-hour-plus press conference, stream of consciousness appearance, tour de force, whatever you want to call it.

I have a lot of e-mails from people who think this is the most hilarious, this is the best, this is the whatever. I’ve never seen anything like this kind of press conference. I actually thought Trump has been better than he was last night. There was something about last night that was a little off to me, not that it wasn’t good, and not that it wasn’t funny, but I don’t know. I can’t explain it, other than to say I was just a bit mildly surprised at the rave reviews people sent me when it was over. And again, it’s a minor point, and it’s really not the point at all. But I want to share with you a sound bite of Dr. Krauthammer on the Fox News Channel when the thing was all over. Bret Baier brings Dr. Krauthammer on to analyze what we’ve just seen.

KRAUTHAMMER: I don’t think I’ve ever heard such a stream of disconnected ideas since I quit psychiatry 30 years ago. That was quite a performance, and it was very weird. That was a performance, that was live television, that was reality television, and that nobody can do, and that has its appeal. I think that’s gonna be really dangerous, ’cause he often can go off the reservation comparing himself to, what was it, Abe Lincoln, his number two, in how presidential he is. That’s a little bit weird, but he’s been able to carry it off. I think people have a sense of humor about him, which is good because otherwise they’d be terrified. And that’s what has been carrying him through. In the end it will be a one-on-one and it will get a little more serious.

RUSH: So that’s a funny line. “I haven’t heard such a stream of disconnected ideas since I quit psychiatry 30 years ago.” That may be one of the lines of the campaign. But these guys are clearly flummoxed in trying to understand this. I mean, you’ve got people saying this is a sacred process, the presidential race, the election for president is a sacred trust, and this guy, he’s just soiling it, he’s just making a mockery of it.

And then here’s Mitt Romney over there on Jimmy Kimmel Live reading mean tweets and everybody is trying to figure why it is that the American public is not repulsed by this, why they’re not worried. This is a presidential campaign, and it is a personal reality show. And everybody’s trying to figure out why the American people are unbothered by it, and I can explain it to you. As a member of the media and as a student of the media, I can explain it to you if you want, but I’m not gonna take a whole lot of time to do it now because it really doesn’t matter. The bottom line is people are not bothered by it, a number of people aren’t. Some people are, is the point.

What did it get him? And remember, now, I’m asking the question in the context of everybody wringing their hands over what Trump is doing to damage the sacred trust. Trump is making a mockery of it, how Trump is lowering it and it now is no different and no better than a reality show on TV, and this is not what presidential campaigns are supposed to be. It’s in that context that I ask the question.

George W. Bush treated the office of the presidency with reverence. George W. Bush told me over and over again, whenever I had a chance to be with him, I would constantly ask him, why aren’t you pushing back on all this stuff they’re saying about you and your administration and people in your administration? They’re destroying your judicial nominees. They’re out there destroying you. They’re claiming you lied, people died. They’re claiming you knew there weren’t any weapons of mass destruction.

And when he would talk to people privately, he would hit back at ’em and you would think, “My God, the guy gets it,” and you wish this guy would show up on TV. How many times have I told you this? But yet when it came time to go public, none of that. And what George W. Bush told me was that he refused to take the office of the presidency down to the political gutter by reacting to obvious political chatter and cheap criticism. He told me he had too much respect for the office to take it there. And he couldn’t avoid taking the presidency there because he was president.

Okay, fine and dandy. Whatever you think of that, the bottom line is what did it get him? He treated the office with great reverence and great respect and refused to do anything to sully it. It didn’t help him a bit. The American people did not have any pride. The media, the Democrat Party was able to convince a majority of Americans that Bush was rotten, that Bush was a liar, that Bush was incompetent, that Bush was stupid, and all of the reverence that he showed for the office didn’t matter. 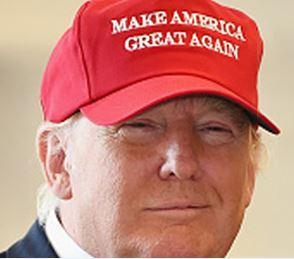 Now, my point is, when you’re trying to understand why aren’t people disgusted over what Trump is doing to the office and the campaign and the reverence? We’ve seen now in recent years that we live in a different generational era, particularly in our pop culture. And there are people, and probably an increasing number of people, who don’t find anything wrong — in fact, not only do they not find anything wrong about it, they think it’s refreshing. They think it’s refreshing that a real guy who talks like real people — i.e., like they do — is not acting all heady and lofty and uppity over them and is just behaving like anybody else would, like they would if they were in the same shoes.

I find it’s a fascinating… maybe not dichotomy, but it’s clearly a dilemma. It’s like so many conventional wisdom rules that have always worked in the past are out the window and not working now. I go back to this Wall Street Journal headline today: “Angry White Males Propel Donald Trump and Bernie Sanders.” This, to me… I could be wrong about this because there’s been so much media over the course of years of this program, but best of my recollection is “angry white males” has always been an epithet used by Democrats to describe Republican voters who don’t buy into the Democrat Party.

Well, now all of a sudden we have a supposedly Republican oriented publication, Wall Street Journal, is now calling Republicans angry white males, and now there are allegations that angry white males are now voting in the Democrat side, too. And I think this is just the establishment trying to comfort itself to explain what’s happening to itself, because they can’t figure any of this out. It violates so much of what they thought they had put in place and had total control of. And that’s really the nub of this, the panic they feel at having lost control.