RUSH: Tom in Centerville, Ohio, who was at the Trump rally at the airport in Dayton. Great to have you on the program, sir. Hello.

CALLER: Thank you, Rush. I’m first-time caller, longtime listener. It’s an honor to be on your show.

RUSH: Thank you very much, sir. I appreciate that.

CALLER: Yeah, I was at the rally on Saturday in Dayton, and I can tell you that these disrupters were organized. They did their disruptions at timed intervals. They didn’t do it all at once. They did it in a coordinated fashion. They were orchestrated. And they were all peacefully let out. The security in the place did a really good job of escorting them out. There was nothing but peacefulness from the Trump supporters. And we were just there to attend the rally and enjoy the political atmosphere.

RUSH: That is a good question. How many protesters in Dayton on Saturday? You say you were there. How many of them got beat up by you and others at the Trump rally?

CALLER: None of them got beat up. I’d say there was probably about 20,000 people there. Maybe a total of like 25 of them got escorted out. But I found it interesting that they got escorted out one at a time in sort of staged intervals. So it was definitely, in my mind, an orchestrated disruption.

RUSH: Of course it is! The fact that they’re there is all you need to know that it’s orchestrated! A bunch of people that don’t support Trump show up at a Trump rally? Of course it’s orchestrated, and I’m sure they’ve got a battle plan. I’m sure their timed intervals are such that they all know when it is. Probably like a hand signal is given by somebody as to when to go, and you can always tell when it happens ’cause Trump stops what he’s doing and reacts to it.

“Get ’em out. Get ’em out. Throw ’em out. Man, I’d love to punch him in the face, punch him out. I’ll pay the legal bills.” But everything was fine until these people start disrupting things. And, by the way, they are not the lovable, little peaceful fuzzballs. These are not people showing up hoping to be heard and protest and get their point of view out. They’re trying to shut these events down and they jostle people around. They shove. These are not nice people, if I can just be as simplistic about it as possible.

They’re mean little angry troglodytes, these leftist protesters, and they have only one purpose, and that’s to shut down these events and disrupt them for whatever reason. They get their jollies or they don’t want the event to go on. They want to make it look like there are many more people opposed to whoever it is conducting the rally than there are supporters. Anyway, I appreciate the call, Tom, very much.

RUSH: Here’s John in Cleveland. He was at the Cleveland Trump rally. How are you doing, sir?

CALLER: I’m doing great, Rush. Thanks for taking my call. You just fulfilled a wish on my bucket list. Thanks.

RUSH: You bet, sir. Great to have you here.

CALLER: Hey, I just wanted to call. We went to the Trump rally in Cleveland. I took my son, a few of his friends, and we met about six more kids there. We had a blast. Every time he said “get ’em out,” the place roared. There wasn’t any violence. There was nothing. The protesters —

RUSH: So you didn’t beat up any Trump protesters? You didn’t see it happen?

CALLER: No. The kids were — you know, they’re all seniors, they’re about 17, 18, so they grabbed signs and they were shouting USA next to the protestors. That’s about as heated as it got. But they had a blast. But I gotta tell you, the most impressive thing they got out of it. I mean, they loved the whole thing. But the most impressive think they got out of it was watching a guy fly away in a jet that he paid for with his own money. I mean, everybody in the parking lot was looking like, wow, you know, success.

RUSH: You know, it’s interesting you say that, because there was a Trump rally in — not Boca. I forget where it was. But I saw the link to it, and I tuned in to it early. It was on YouTube. And there was just a shot of the stage looking from inside the hangar out where the Trump plane would eventually be parked, where it was at the rally in Dayton. And I watched, I wanted to see what happened when that plane taxied in. I wanted to see if the camera would capture any crowd reaction. I wanted to try put myself there and imagine the feeling, what you just said, here’s a giant 757 with this guy’s name on it, and it comes rolling in. And the crowd went nuts.

It was impressive. That plane taxis in and you know it’s loud, even at taxi it’s pretty loud. It roars in, and it pulls up right next to the hangar, and I wanted to see, ’cause I know everything is staged, and everything is done to make the best impression. So I wanted to see who got off first, who they were, whether it seemed to be an orderly procession down or just the first person off. The first people obviously were Secret Service and security. They stood at the top of the stairs and they surveyed. They were talking into their watches or whatever they were talking into, their lapel microphones, surveying the scene.

It looked big. It looked presidential. And then these guys one by one descend the stairs. And there’s maybe seven or eight of ’em, and they all look like security people in their dark suits and ties with the earpieces. And then here comes Trump. He starts waving, deplaning that plane, waving, gets off the plane, doesn’t have far to walk, gets to the podium, and the place is going nuts. And, you know, the entirety of the whole scene is what’s designed to make an impression.

Now, John, I want to make sure I heard you correctly. You said your two kids were with you, 17 and 18, and the thing that really jazzed them was when it was over and that plane leaves, the fact that Trump paid for that plane with his own money is what they were talking about?

CALLER: Oh, yeah. It was weird. We’re all stuck in the parking lot there ’cause there’s only a couple lanes out and it was packed. So when Trump’s plane started going toward the runway, whatever you call it, when he’s going to taxi. 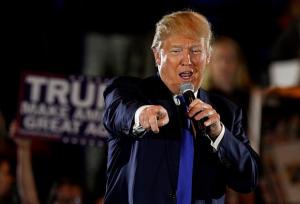 CALLER: Anyway, everybody in the whole parking lot stops, and they’re all looking at this big plane. It’s hard to describe. But there were just heads all over the place.

RUSH: Yeah, but what’s the big deal to your kids about the fact that he paid for it? How’d they even know that?

CALLER: — they know the taxpayers didn’t buy it for him, so —

RUSH: Ah. There you go. So they were impressed that he had enough money to buy it himself, or what’s the deal with it?

CALLER: Oh, yeah. That’s what I say, Rush. I mean, these kids are all 17 and 18. I went with my son and a bunch of his friends from high school, but they’re all really impressed with his success, and despite all the things the media says about —

RUSH: See, they want it. They want it and they think they can get it. I appreciate your call, John. Thanks.