RUSH: I’m still sitting here not really believing what I heard yesterday from Chris Cuomo, that sound bite about communism in which he said communism has got to work to promote individual liberty and upward economic mobility for everybody. I still can’t get over this. That was such an eye-opener for me, how people have been lied to by, I don’t know how many years, university professors — probably throughout the education level — about what communism is.

You know, if the truth about communism, if it’s told, nobody could end up supporting it, if people actually knew what it is. And yet legions, hundreds of thousand, millions of Americans have starry eyes about communism. And I finally figured out why. They’re being lied to about what it is. Communism is actually portrayed as the route to utopia. Forgive me for being so naive as to believe that the truth of communism was being taught, and that’s why I couldn’t believe how so many young people bought into it.

The evidence is all over the world about what communism is. I mean, ISIS, communism, it’s all the same stuff, terrorism, it’s all the same stuff. It comes from the same ideological mind-set. And there’s nothing about ISIS trying to elevate people, freedom, equality, and sameness. So guys like Chris Cuomo have been sitting around here for 30, 40, 50 years, asking when’s Castro gonna make this work? Because communism is about elevating people, not about dispiriting them, demoralizing, but elevating, everybody’s equal, everybody’s the same thing, great economic futures, so when is that gonna happen? Isn’t that the point of communism? He actually asked that question on the air yesterday, isn’t that the point of communism. Oh. I still can’t get over it.

RUSH: To the audio sound bites we go. Barack Obama in la Habana addressing the people of Cuba. During his remarks he talked about the terror attack in Belgium for about 52 seconds. We have 30 of those seconds here.

OBAMA: The thoughts and prayers of the American people are with the people of Belgium, and we stand in solidarity with them in condemning these outrageous attacks against innocent people. We will do whatever is necessary to support our friend and ally, Belgium, in bringing to justice those who are responsible.

OBAMA: And this is yet another reminder that the world must unite.

OBAMA: We must be together regardless of nationality or race or faith in fighting against the scourge of terrorism.

RUSH: I’m sorry, folks, but that’s a crock. The problem is not lack of unity. What, we’re supposed to find a way to unify with ISIS? We’re supposed to unite with criminals and terrorists? How does that work? It’s yet another reminder the world must unite? You talk about a worthless, pointless reaction to this. That’s not what the world has to do to stop this. The world has to get serious and wipe these people out. But, no, we must come together. We must unite. We must stop the conflict. We must stop being critical of one another. We must work together. We must represent our values. We must do everything we can to show that we — it’s a bunch of gobbledygook. Yet another reminder the world must unite. 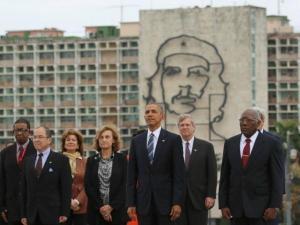 So terrorism’s happening because what? There are disagreements in Belgium? What are the disagreements in Belgium that caused these clowns to blow up what they blew up? No, no, no. Folks, I’m dead serious. This is irresponsible. If Obama were a lawyer, this is close to malpractice. It’s irresponsible. This doesn’t even get anywhere near dealing with what really happened. I saw a debate on TV today, and Joe Trippi, the former Howard Dean campaign consultant, accredited member of the establishment. And the question was, should Obama leave Cuba and come back to the United States, in light of the attacks, and I guess show us unity. We gotta come together, right?

So should Obama leave Cuba, come back here. And Trippi (imitating Trippi), “No, no, no, this is too important a deal down there.” But what about flying off to Europe? Should Obama fly off to Europe and show unity? And Trippi said, “Yeah, that makes sense.” What am I watching here? It makes sense for Obama to go to Europe at some point and do what? Stand with them and show them that we care? That we’re thinking and we’re praying with the people of Belgium and that we’re standing in solidarity? It’s another example, another reason, reminder that the world must unite, we must be together regardless of nationality or race or faith, in fighting terrorism.

The only people I know of that don’t want to fight terrorism, Mr. President, is you! What do you mean, come together to fight terrorism? Show a little leadership on it. You won’t even call it what it is. You will not even use the words, “Radical Islam.” You will not say “radical Islamic terrorism.” You will not say “militant Islamic terror.” You won’t even use the words. Who’s not united in opposing this? Who are these laggards that will not join the effort to oppose ISIS? Who’s he talking about?

See, to the modern educated American, it sounds so wonderful, it sounds so caring, it sounds so sensitive, and it sounds really, really connected, really, really in touch. Yeah, we should all come together. That’s great. We should come together. We should unite. That’s the problem. There’s too much hatred in the world. There’s too much racism. There’s too much bigotry. Yeah, we need to end all that. That’s what we need to do. And that’ll send a message, you know, uniting and ending racism and ending bigotry and fighting climate change, that’ll show ’em. That’ll send the message to these terrorists, that’ll show ’em we’re serious, and that’ll scare ’em, and that’ll make ’em stand down. When they see that we’re serious about wiping out racism and bigotry and we’re serious about fighting climate change.

That’s what they’re saying. That, in a nutshell, is what Obama and his gang on the left are telling us to do. It’s irresponsible, and it’s not even relevant. These guys, wherever they are now, see this on TV and they just laugh. And I’ll tell you what else. They’re probably trying to hatch another attack since he only gave ’em 52 seconds. That’s not enough of his attention.

Here’s more from… I stay on a roll here. Back to Cuba and Barack Obama now apologizing to Cuba for the way we have exerted control over the island paradise.

OBAMA: Havana is only 90 miles from Florida, but to get here we had to travel a great distance, over barriers of history and ideology, barriers of pain and separation. The blue waters beneath Air Force One once carried American battleships to this island to liberate but also to exert control over Cuba. The Cuban revolution took place the same year that my father came to the United States from Kenya. The Bay of Pigs took place the year that I was born. One constant was the conflict between the United States and Cuba.

RUSH: What does that have to do with anything?

OBAMA: I have come here to bury the last remnant of the Cold War in the Americas.

OBAMA: Because in many ways the United States and Cuba are like two brothers who’ve been estranged for many years even as we share the same blood.

RUSH: What a crock.

OBAMA: We both live in a New World colonized by Europeans.

RUSH: Does anybody still want to try to tell me I’m wrong here about who this guy is and what it is that informs him and motivates him? Can somebody deny this guy is walking around with a giant chip on his shoulder about this country’s very existence from the days of its founding? Castro’s Cuba is a communist dungeon. It is an economic, political, human disaster. And we have just heard about all the similarities and the moral equivalence and how the same bunch of reprobates that settled Cuba settled the United States — the same bunch of racist pigs, the same bunch of slave owners and slave traders, the same bunch of colonizers, colonialists — founded both countries.

That’s why we are no better than they are.

This Obama stuff, it is… I don’t know characterize it. It’s just offensive, it’s irresponsible, it is ignorant. What is this desire he has to find all of this sameness, all of this commonality with communist thug countries? What is it about Hugo Chavez and people like him that people like Obama think are great people? The same happened there. Obama goes down to Venezuela, shakes hands with Hugo Chavez, embraces him, smiles big, a bunch of books went back and forth, signed autographs. What is the fascination these guys have?

I know the answer. I’m asking it rhetorically.

RUSH: Yeah, let’s pick one last Obama, who is speaking in Havana this morning. Obama addressing the people of Cuba and this is our last sound bite of his remarks.

OBAMA: In the United States we have a clear monument to what the Cuban people can build. It’s called Miami.

RUSH: By the way, that last is translated as “the Cubans invent from the Web.” So there you have it. There is a clear monument to what the Cuban people can build. It’s called Miami. Well, to the extent that’s true the people that built Miami are the people that fled the place, Mr. President. They fled the place after Batista left and Fidel came in, they got out of there. They lost everything in Cuba, Mr. President.

Their property was taken from them, their estates, everything they owned was taken from them by the Regime and they fled for their lives and they fled for their freedom. They took their good old conservative values and they built up parts of Miami where they live. But Castro had nothing to do with it. The people you’re talking to in Cuba had nothing to do with it other than the fact they’d love to get out themselves and go to Miami. It’s beyond the pale how insulting this is. It’s just the latest in a long line of them from this guy.