RUSH: Barrington, Illinois. John, as we head back to the phones, you’re next. It’s great to have you here.

CALLER: Hi, good afternoon, Rush. You know, I think I speak for some others who have been throwing drinks or shouting back at the radio when people like Susan from a couple days ago come on and the first thing out of their mouth is there’s no difference between Trump and Hillary. I can’t believe that you let her go on without proving that statement up.

RUSH: Wait a minute, now, I’m having trouble remembering that. I’m not disputing you, but a lot of stuff happens here every day. I think I know who you’re talking about. Was she —

CALLER: She was the one that wanted to ridicule the Trump supporters into behaving.

RUSH: My memory is somebody getting mad at me for not supporting Cruz and condemning Trump, but I don’t recall. Go ahead, time is dwindling. Make your point.

CALLER: She was not going to vote for Trump. I believe she was for Cruz. And, you know, my point is, people need to get their priorities state. We have a 57-game exhibition schedule to pick our starter for the political Super Bowl, and there’s only one political Super Bowl, and you cannot undo the process. And the people that are not willing to put our best candidate forward and the one that all of us are participating in choosing —

RUSH: Wait. You’re laboring under a very important misunderstanding, and that is that, given this season, there are a lot of Republicans who are more than willing to lose this election rather than have Trump win it as a Republican.

CALLER: Well, I think their priorities are out of order.

CALLER: Well, I think they won’t have a job, then, because I don’t think there will be a party after that because I think, between the Tea Partiers and the Trump supporters, they’re gone forever if this is somehow undone —

RUSH: Okay. Here’s John back in Barrington, Illinois. I didn’t want to shortchange you on your time there since I interrupted you to try to… I wanted to disabuse you of one of your premises, and that is that everybody’s gonna be united behind the nominee if it’s Trump. I don’t know. I wish it would happen, too. I even said so on Fox News Sunday, that everybody would finally realize the enemy is Hillary Clinton and the Democrats. But there’s so many people on our side personally invested in maintaining their own position in life and their whatever you want to call it — establishment, the club, in Washington, wherever — that Trump being elected effectively leaves them out of power. That’s horrible from their perspective.

CALLER: Well, number one, I think that’s just as ridiculous as saying that Trump is a Nazi. I mean, Washington isn’t gonna go away, and if the Republicans have control of all three branches of government, you know, there’s plenty of room in the government and in the process for everybody to work on something. And if Trump is going to do as much to push projects ahead, I think there will be plenty of work for everybody to go around. It may not be as much as they want to do in the area that they want to do, but I think he’s just gonna reset the priorities.

You know, one of the things I was thinking about was, since Reagan, there’s only three — now four including Cruz — guys that I consider guys that are willing to completely go to the mat for Republican or conservative principles, and that’s Gingrich, Trump, and Cruz. Everybody else to me… You know, Romney, if he would have taken it to Obama and made the last election about Obama’s record? He didn’t do that. And to me that’s an evidence of, you know, a lack of combativeness. And, you know, under Gingrich and Reagan, there was progress made on conservative and free market principles. And so I think it requires somebody who’s got some combativeness to push things ahead in those areas, and if Trump is only 50% conservative, that 50% conservative and combative to me is better than 100% conservative and not combative. 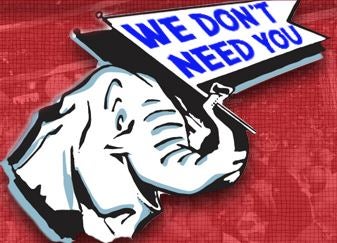 This is why I have spent so much time in recent weeks trying to explain it, that it’s personal. It’s about maintaining their current position in life that they fear would be imperiled if Trump were to win or if anybody outside the establishment were to win. The opposition to Trump is categorized by the people I’m talking about, which is a finite number of people. I’m not talking about everybody that opposes Trump. I’m no… I’m talking about… I don’t know how to be more explicit than I have been. I just don’t want to name names here.

But the people that are responsible for this line of thinking, you could put ’em in a couple of blocks of Washington, and they are trying to motivate other people to agree with them. And it’s those people that are out there saying this. Some of them are elected Republicans; others are in the punditocracy; some are in the media; some are at K Street; some are lobbyists; some are campaign consultants or whatever. And they’re all saying, “Trump is so bad, so unacceptable that we’ll vote for Hillary first.”

Now, there’s no way under the sun that a Republican, in this era, votes for Hillary Clinton or does anything to enable her to be elected, not one who is actually engaged in taking things seriously. Can’t be doing that. This country is at a crossroads, and there’s not a whole lot of time here between us and the edge of the cliff. And the election of Hillary Clinton or whoever would get the nomination if she doesn’t is — to anybody really thinking — totally unacceptable. These people are not analyzing it the way you did and the way you do.

They’re not looking at it in ideological terms, you know, “Trump’s acceptable because he’s maybe half conservative or 25%.” He’s not them. He never has been them. He’s not part of them. He’s not qualified. Besides, he poses a threat. Think of these guys as individual Wizards of Oz, and somebody’s about to rip the curtain open and they’re about to be exposed. These are the people I’m talking about. The Wizard of Oz didn’t care what happened to Oz. He cared what happened to him.

And it’s not very many people, but it doesn’t take many people to have the power to run the apparatus here that is known as the Republican National Convention or the upper echelon to the Republican Party. Look, another Politico story today. Another El Rushbo See, I Told You So. The headline: “Trump’s Foreign Policy Team Baffles GOP Experts.” Now, one of the people named is Walid Phares, who is excellent on international Islamic terrorism. He’s a frequent guest on TV. I cite the guy practically every time he appears on TV.

He makes so much sense in identifying who the players are and what their real motivations are and what their tactics are and where the real alliances are in this mess that we call the Middle East and Islamic terrorism and so forth. But here’s the nut of this story, if you will. It’s The Politico, and Michael Crowley writes it. “Trump’s Foreign Policy Team Baffles GOP Experts — Republicans can’t figure out the mogul’s quirky mix of advisers.” And then we go to page two. I’m not gonna give the name because I don’t want this person to start getting inundated with mail. That’s not the point.

“‘I don’t know any of them,'” these Trump foreign policy people, “said a research fellow at Stanford University’s Hoover Institution and a former official in the George W. Bush State Department. … ‘National security is hard to do well even with first-rate people. It’s almost impossible to do well with third-rate people.'” Well, this pretty much… Translation: “I don’t know these people. They’re not in the club! These people Trump’s named, I never heard of. I don’t know who these people are. We can’t have them! I don’t know them. I never heard of them.”

It’s like the famous New York writer Pauline Kael. After the election of Richard Nixon 1972, she was a New Yorker, and she said, “I have no idea how this happened. I don’t know anybody that voted for Nixon!” So here you have a former Bush State Department person saying (translated), “I don’t recognize any of these people. I never heard of ’em. I don’t know any of ’em. You know, national security is hard to do well even with people like me.

“But you put people in there I never heard of? Oh, no! We can’t have that.” Classic. They’re not in the club — and that’s, frankly, what most people think is a plus, is getting people in the club. Let’s face it: The club ain’t doing too hot, folks. The club has been messing things up here for at least seven years, if not longer. Anyway, John, I appreciate the call.

RUSH: When are we gonna start questioning who’s on Obama’s foreign policy team? When are we gonna start questioning who’s on Hillary’s foreign policy team? Look, I know it’s the Republican primary, and I know the contest right now is for the Republican nominee. I get that. But the problem is, all of this vitriol at Trump or at Cruz or back and forth, when it’s over, none of it’s gonna end up being redirected at the Democrats where it really needs to be directed.