RUSH: I’ve got the audio sound bites coming up. It was CNN. Some guest wanted to talk about Clinton in the ’90s, and all of the women CNN hosts and hosts just shut it down, and they got mad about it. “We are not going there! That’s old news. That’s tawdry. We’re not going there,” and yet Bill Cosby has been dragged into court for things that he did much longer ago than the 1990s.

I mean, Cosby is actually facing charges over this stuff, and nobody is saying, “What are we doing here? Why are we focusing on Bill Cosby? It’s old news. Nobody cares anymore. Been there, done that.” And the same thing with any Republican. It doesn’t matter how old the news is, they’ll go back and investigate anything. If they even have to make it up, like Harry Reid making up the fact that Mitt Romney hasn’t paid taxes in ten years, they will, and the media says, “Well, who told you that?” And Harry says, “It doesn’t matter. You need to go ask Romney why he hasn’t paid his taxes in ten years.”

So the media dutifully marches off and they go do that.

And when the campaign is over and somebody goes to Harry Reid and asked him about it, he said, “Hey, we won, didn’t we? Romney lost, didn’t he? So, mission accomplished!” It’s more of the double standard, but it also indicates… The fact that these Drive-By Media types do not want to go back and relive the ’90s? There’s nothing that’s any big deal. What’s the problem? I mean, after all, Clinton survived it. He’s got this big foundation. He and Hillary are multi-multimillionaires. They are highly respected around the world for their “charity work.” What is the big deal? I mean, if what happened in the ’90s was no big deal then, why is it a big deal now?

Obviously it was a big deal then, and they had to work overtime to cover it up, and they don’t want to have to try to do that again because I think they probably doubt their ability to run that same cover-up operation twice.

RUSH: Okay, audio sound bite time. This is the Clinton News Network back in action, CNN. A number of anchors are shutting down discussions of anything to do with Bill Clinton in the 1990s, while at the same time condemning Trump. At some point yesterday afternoon, CNN went back to the ’90s and became the Clinton News Network all over again. Brooke Baldwin, the infobabe in the afternoon shut down Kellyanne Conway when she dared bring up the fact that Clinton settled the Paula Jones lawsuit. They’re talking about it, Clinton’s history with women, and we join it in progress at that point.

BALDWIN: We’re not hearing all this dirty laundry here. I just can’t believe we’re going there.

RUSH: She was just talking about how Clinton had settled the Paula Jones lawsuit for 850 G’s. It was a factual matter. There are not even allusion to what was going on between the sheets with Clinton, or in the bathroom off the Oval Office, or cigars. But dutifully right there was Brooke Baldwin (imitating Baldwin), “Oh, my God, oh, my. Okay, okay, okay, we’re not airing all this dirty laundry here. I just can’t believe we’re going there.”

We’ll go back to 1980 for Bill Cosby. We’ll go back to prep school for Mitt Romney. We’ll go back to Newt Gingrich’s mother talking to Connie Chung back in the seventies. We’ll go back as far as we have to to continue to air and re-air whatever Republican dirty laundry, but they’re not going back to the Clintons. Wolf Blitzer, Situation Room last night, talking about Trump bringing up the Vince Foster death and said this.

BLITZER: I was the White House correspondent for CNN in 1993. I remember all of that very vividly. It was a sad, sad moment for everyone involved, especially Vince Foster’s family, and now for the Republican presidential presumptive nominee to revive all of that at this stage, that seems beneath Donald Trump.

TAPPER: Mr. Trump, you lent credence to a bizarre and unfounded conspiracy theory. The notion that this was a murder is a fiction born of delusion and untethered to reality and contradicted by evidence reviewed in at least six investigations, one of them by Ken Starr, hardly a Bill Clinton defender. To say otherwise is ridiculous, and, frankly, shameful. Again, this is not a pro-Clinton position or an anti-Trump position. It is a pro-truth position.

RUSH: But here’s the thing. If you don’t like Trump going back there, you can do all that, but it does come across as pro-Clinton all over the place, because there seems to be this need to defend, which does not happen for Republicans. When it comes to Republicans, the nature of the evidence is irrelevant. It’s always the seriousness of the charge.

I give you Clarence Thomas and Anita Hill. The nature of the evidence was irrelevant. It was the seriousness of the charge. I give you a guy named Gary Sick, Columbia University, wrote a book once claiming that George H. W. Bush, in 1979 was flown to Paris on an SR-71 spy plane and had a meeting with the Iranians, at which time George H. W. Bush told the Iranians, “You do nothing. You keep those hostages hostages until Reagan’s elected, then you’ll release them.”

Gary Sick published that story in a book. He was all over TV being interviewed about it. Tom Foley, the Speaker of the House, said we don’t have any evidence to support any of this, but the seriousness of the charge requires that we investigate this. And so they did. There was a House investigation 10 years later about whether Bush had flown to Paris to meet with Iranian officials to arrange the hostage release only in the event of Reagan’s being elected president. There was no evidence. 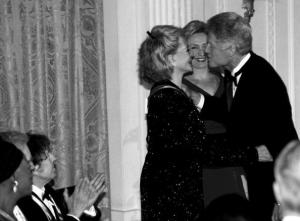 So with Republicans, the seriousness of the charge always determines whether they cover something, not the nature of the evidence. Now, with Clinton, this is silly, it’s absurd. There isn’t any seriousness of the charge, we need to investigate this. These same liberals, they still publish theories about the JFK assassination, though the Warren commission said it was only Lee Harvey Oswald. But every so often they go back to Lincoln. But when it comes to Vince Foster ah, ah, ah, ah, that’s despicable, no way, Jose. It’s just different than the way they’re all treated. Erin Burnett on CNN is outraged that Trump is going too far, dredging up things that are deeply personal.

BURNETT: Trump going deeply personal, and I mean deeply personal. We are dredging up things from the past, accusations of the past, many of which have been completely debunked. Is he going too far?

BERMAN: We begin tonight with new attacks from Donald Trump against Hillary Clinton that are actually neither new nor against Hillary Clinton, when you get right down to it. In at least one case, Vince Foster, Trump is trafficking conspiracy theories that have been proven false, repeatedly. Donald Trump continues to find different ways of singing a song written long ago about his opponent’s marriage and about her husband’s behavior.

RUSH: So CNN did decide to circle the wagons. Which, hey, folks, they can do it. I’m just pointing out that they are while they may want it to appear something else.