CNN Anchorbabe Really Wants to Know: What Was That Alligator Thinking?

RUSH: I found what it was about a reporterette wondering what the alligator was thinking.

It was actually on CNN, and it was Brooke Baldwin.  It was last Wednesday afternoon. Brooke Baldwin was speaking with Gatorland alligator rescue expert Tim Williams about that incident with the gator and the 2-year-old baby at Walt Disney World in Orlando.  Man, that’s just gotta be… Those poor parents. I cannot imagine. That’s something they’re never gonna… I mean, it’s never gonna leave their minds, the whole… Anyway, boy, your heart just goes out to them.  How do you ever forget the mental image you conjure?  Anyway, here’s Brooke Baldwin asking a question to Tim Williams of the Gatorland alligator rescue outreach.  He’s an expert there.  Number 27.  Audio sound bite 27.  Three, two, one.  I guess we don’t have it.

BALDWIN:  There were signs: “No swimming.” You know, I don’t know if there were no wildlife signs. I realize that, when you come to Florida, Florida has a lot of gators. What do you think…? I mean, if the child was walking around the periphery of this lagoon, it was nighttime, what would the gator be thinking?

They were walking around. They didn’t know they were on a frozen body of water and a couple of them fell in.  And the news report had the other cows looking on hopefully, with hope and fear — hope that their friends could be rescued and fear that they would fall in, too.  And the cows are sitting there chewing their cud. They couldn’t care less. They’re clueless.  One minute the cow’s there; next minute it’s gone. Big whoop.  Your dog doesn’t think, your cat doesn’t think.  They don’t think.  They don’t have…

You know, we run into alligators all the time on the golf course.  I mean, they’re out there, and they’re just idiots.  They’re sitting around. When it’s time to eat they get up and move and go swallow something and then they go back and just lounge there like whatever they do.  We sometimes throw golf balls at ’em just to see ’em move.  One day, there is a giant… You’ve seen some of these videos lately of giant alligators walking on the fairways of golf courses.  Well, at one of the golf courses I’m a member of here, there is a giant gator out there.

We know where it is, and sometimes it’s just barely viewable on the surface.  Sometimes it’s on the bank.  When it gets up and starts walking, we stop what we’re doing to watch it ’cause it’s the most amazing-looking thing.  And then we all… We don’t get too close. That thing can go 20 miles an hour for like 20 seconds. The golf course rules are if the gator gave his chase, zigzag. They can’t do that. They can catch you if you go straight line.  For 30 seconds, those things can do like 25, 30 miles an hour.  After that, of course, it’s time to go back and grab another Bud.  But they don’t think!  It’s pure instinct.  They just… 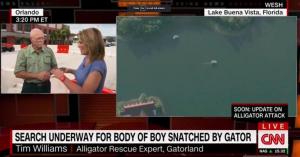 You know, that’s just typical male, predator behavior taking over in an alligator.

You know, men, humans, male humans are nothing but predators.