WaPo Responds to Me, Tells Us Why Apes Aren’t Evolving Into Humans

RUSH: Ladies and gentlemen, you may not remember this.  Well, you’ll remember the thrust of this.  Not long ago, a gorilla made friends with… How old was the boy that fell in, 10? (interruption) Oh, that’s right, 2 or 3 years old. A little boy with his mom at the Cincinnati Zoo fell into the gorilla enclosure.

RUSH: Back to the gorilla.  When I saw how people are reacting to this — and, yes, I will admit sometimes I engage in satire, mockery.  Sometimes I like to illustrate what I think is absurd behavior by being absurd, as you well know. So I’m watching people humanize this gorilla, and almost worry more about the fate of the gorilla than the potential fate of the child.  And so I’m watching, and I’m seeing reports of what people saying on Twitter.

So I decide to light a match and throw it in this fire, so to speak.  So I asked innocently on this program, “Could somebody explain to me why there are still apes?”  Knowing full well what was gonna happen.  Knowing full well that a bunch of leftist, arrogant snobs would take that comment and run with it and think that I was insulting them by proclaiming there is no such thing as evolution.  That’s what they would assume I was saying, and they did exactly what I thought.

They started massive Twitter feeds and Facebook posts about what an idiot I am and how silly I am to try to prove that there is no such thing as evolution by asking, “How come there are still apes?”  And that’s all I did.  I just innocently asked, as an aside, “Could somebody tell me by the way, why are there still apes?”  I knew it would fire ’em up, I knew it would tick ’em off, I knew they would start insulting me.  And they did.

Well, I have a story here in the Washington Post in my formerly nicotine-stained fingers.  I want to read to you the headline here: “Why Aren’t Apes Evolving into Humans?” Right here it is, the very question I asked, attempting to stimulate a fire and cause chaos out there. Now they’re actually asking it! I guarantee you this comes from that program.  I guarantee you.  What this is, is a science column where they answer questions written in by readers.  The headline exactly:  “Dear Science:  Why Aren’t Apes Evolving into Humans?”

You know what the answer is, by the way?

I mean, this program took off making fun of liberals.  It had never been done before.  Nobody had ever done it, and they have been in recoil ever since for 27 years.  When you poke fun at what they believe, and especially when you do it in a way that blows up what they believe, they react in an irrational way, and that’s what I knew they were gonna do when I simply lobbed that little question in there in the middle of the Harambe episode. “Hey, by the way, can I ask, why are there still apes?”  That became the number one trending thing on Facebook, just to show you.  I think for a full day that was in the top, may have been the number one trending item in the Facebook feed, because the liberals were outraged.

They thought I was trying to illustrate that there’s no such thing as evolution.  Of course liberals and tech people all think evolution is incontrovertible, and they think that cross-species evolution happens all the time.  And they believe in it and they don’t believe in creationism, and they think that people who do are small-minded twits, most likely religious, which means they are very narrow-minded, closed-minded and just dead set on not having a good time.  And so they are to be blown up and discredited.  So that’s why I threw it out there.  I knew it would tweak ’em.  I knew it would upset ’em.  And it did.

Now, in doing it, I run the risk that they’re gonna launch all these broadsides at me as a stupid idiot, ’cause they don’t understand when you’re mocking them.  They don’t understand.  Well, they do sometimes.  Other times they don’t.  And this is a case where they didn’t ’cause most of them didn’t hear it; they just see it on the Fakebook feed and they reacted to it. 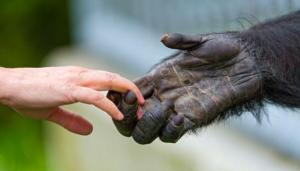 And the answer that the post-reporter gave: “We hate to be the ones to break it to you, but you are an ape.” We are all apes, says the Washington Post.  “So were the Neanderthals, the Hobbits. … And while we’re at it, so are orangutans, gorillas, bonobos and chimpanzees. All of us evolved from a common ancestor that lived about 14 million years ago, and together we make up the taxonomic family Hominidae. Also known as hominids. Also known as great apes.”

So how do they know?  Well, they use cross-species evolution and a number of other things to form their scientific conclusions.  But they can’t prove it, is the bottom line.  So that’s what I was tweaking, that’s all, and they fell for it hook, line, and sinker.  And I just find it humorous that now, about a month later, the Washington Post has a giant headline:  “Dear Science:  Why aren’t apes evolving into humans?”  Something that I was laughed at, mocked, and made fun of is now taken deadly seriously.  It’s the front page of the Science section in the Washington Post.