Expensive Efforts to Control the Weather Have Failed, Yet People Still Look to Government to Fix Things

RUSH: Millennials at this very moment, as we speak, Millennials are being conditioned to believe that if government doesn’t do something, then nothing is getting done.

There are Millennials among us as I speak who believe that if government isn’t passing laws, then things are broken.  Well, now, you and I think the exact opposite.  When there’s a government shutdown or congressional recess, we breathe a sigh of relief.  It means they’re not going to be passing any more laws which have further infractions and restrictions on our liberty and freedom.

Look at here.  This is a great piece.  It’s in the Washington Times by Richard Rahn, former Chamber of Commerce head honcho back when the organization was conservative.  And his premise here, “Causing Less Harm by Doing Nothing.”  It’s a great piece because it’s a piece about climate change and global warming, but it’s applicable to everything.

We live in a time where crises are manufactured every day.  We turn on the news, and every day is a new crisis.  Sometimes there’s more than one.  And with the discovery of every crisis is the requirement or demand that government do something about it.  And that’s just not how life is.  Let me read a portion of this to you to illustrate.

“It has not only been a waste of money, it has done real harm. Some trillions of hard-earned taxpayer dollars have been spent to combat global warming over the last three decades. Has the expenditure of all of this money reduced global temperatures from where they would have otherwise been? No, at least not to a measurable degree.

“The major governments of the world have undertaken a public policy which to date has cost far more than any benefits. The rebuttal by the advocates of all of this government spending is to say it is nothing more than a down payment on what needs to be done and the benefits will accrue to future generations.

“Earlier this month, British scientist Valentina Zharkova and her team at Northumbria University in the United Kingdom, using a new model, predicted that a coming periodic reduction in the sun’s radiation will soon lead to major global cooling.”  By the way, I saw that story.  I saw that story, and the one thing that the current climate change crowd does not put into their models — and let me stress again, there is no official data that shows a dangerously warming climate.  There is none.

Over the last 16 years the earth’s temperature has remained steady.  It has not risen.  Sixteen years.  The computer models, which is the only evidence there is for global warming — this is so sad, it would be laughable otherwise.  There’s no evidence of man-made global warming.  The climate’s changing all the time, but we have nothing to do with it.  We’re just along for the ride here.  We have nothing to do with it.  Climate change is in infinitesimal ways. And, by the way, in geological times, our life span, 85 years, is hardly visible when measured against the life of the planet.

We’re nothing but specks of sand at the largest.  We have no impact on glacier creation, glacier melting, glacier expansion, glacier movement, none.  But besides that, the only reason anybody believes global warming is computer models are predicting it ten years, 20 years, 30 years, 40 years, starting in 1980.  There is no evidence.  There is no data that the world is warming.  This is one of the most brilliant effective hoaxes I have ever seen.  And I’m telling you who has bought it hook, line, and sinker is young people.

The computer models, by the way, do not factor anything to do with the sun.  Believe that?  The computer models predicting global warming specifically eliminate the sun.  You know why?  Because to include the sun, and the sun has cycles, high sunspot activity, low sunspot activity. And when the sun is in a low sunspot cycle, it’s not producing as much heat, it’s not producing as much kinetic energy.  It’s gonna get cooler, it’s goonna get colder if it sustains, and that’s exactly what is happening.

So they don’t put that in their models.  Their models are based solely on CO2, carbon dioxide, the greenhouse effect, pure and simple.  All they do is predict the greenhouse effect 30 years from now, why the temperatures have to — I just saw a story this morning, I forget where, that the Everglades and Miami are gonna be underwater in 30 years.  And the story featured a bunch of scientists who have two troughs of water, one freshwater, one seawater.  They take the seawater and they pour it on plants, then they come back and see what happens.

Well, of course the plants die.  Then they say, “See?  With rising sea levels, everything in the Everglades is going to die in 30 years.”  It’s intelligence insulting to the max.  Now, Rahn’s point is, Richard Rahn, we could have done nothing and everything would be the same.  We could have not spent the trillions of dollars that have been spent.  The problem with that is by not spending the trillions of dollars, a whole bunch of junk scientists and a whole bunch of research outfits wouldn’t have received grants, either. So they might be living in poverty or they might not have had jobs or they might have had to go out and get real jobs instead of writing fake, phony papers predicting dismal results, 30, 40 years down the line.

But Rahn’s point is: “For many decades, it has been known that a decrease in sun spot activity is associated with lower temperatures. Ms. Zharkova argues that we will soon enter a new ‘Maunder Minimum,’ which refers to the period from 1645 to 1715 when the sun’s surface ceased producing its heat-releasing magnetic storms. … During the last couple of weeks, since the release of the new study, the debate has been quite fierce between those who believe that solar changes trump carbon dioxide and vice versa. Remember, ‘climate science’ is not a unified field of study like quantum physics, but a combination of many different disciplines from the people who study tree rings, ice cores, atmospheric gases, cloud science or solar output,” and CO2.  And then there are people that study sunspots. 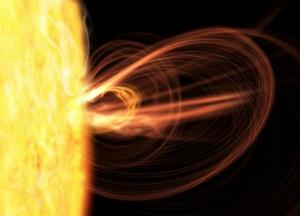 We’ve had all kinds of restrictions on behavior, all kinds of restrictions on liberty and freedom, all designed to save the planet, and nothing we’ve done has made one iota’s worth of difference.  We haven’t reduced the temperature, which we must do if these clowns are right, the temperature’s gotta come down or we’re cooked.  We haven’t done diddly-squat.  The point is — and this is what most of us as conservatives believe — just the less government does, particularly with imaginary crises, the better off everybody’s gonna be.

But, man, have they done a good job of it.  They have created so much belief that these crises every day, every week, are real, and that only government can fix it, and only emergency action, which means government has to get bigger. You have to earn less because your taxes go up. It’s the only hope we all have.  Can’t tell you how it enrages me.