The Rich Can Buy Access to Hillary Through the Clinton Foundation, But Where’s This Great Charitable Organization Helping the Victims of the Louisia…

RUSH:  Okay, I’m gonna ask a question again.  I asked a question yesterday, needs to be asked a lot.  As we keep hearing even today, the Clinton Family Foundation, what a great body of work they do there.  There’s nothing to see there. There’s nothing to see, all this interaction between the Clinton Foundation and the State Department, that’s just a bunch of people requesting access.  I mean, that’s not any big deal.  What’s the big deal wanting access?  That’s not favors.

So what do you do?  You call the Clinton Crime Family Foundation and then Cheryl Mills gets hold of Huma Abedin Weiner and Huma Abedin Weiner then tells Hillary, “Hey, such-and-such wants to talk to you.” They say, “Yeah, yeah, that happened, but that’s just access.”  Access is the favor!  And to think that no favors have been done or promised is absurd, but the Drive-Bys are trying to say it’s just access, no big deal. It’s the way of the world, they’re saying, and it may well be, folks.  I think it is.

Greetings.  Great to have you.  El Rushbo here behind the Golden EIB Microphone.  The telephone number, 800-282-2882.  The email address — again, it’s a new one — it is ElRushbo@eibnet.us.  Ah, hang on a minute here, folks, my microphone boom is the latest piece of equipment here on blitz.  One second.  There we go.  I got it.

Here’s the question.  If they do such good work over there at the Clinton Crime Family Foundation, why is the Clinton Foundation not offering any help, any aid, any money, any food, any cell phones to the devastated, dare I say white population, in Louisiana?

Yeah, Obama’s got it covered today after 10 or 11 rounds of golf.  Obama’s going down there today — or is it Thursday that he’s going? (interruption) Supposed to be in there today.  Okay, within the hour.  I should have suspected he would arrive during this program.  Of course that’s what they would do.  Seriously.  So Obama’s got that covered?  I mean, the Clinton Crime Family Foundation was all over Haiti.

But, I mean, we’re hearing about what great charitable work is done there. We’re hearing about how compassionate the Clinton Foundation is, and yet here’s Louisiana with record flooding.  You know, we know some people who have incurred some great damage down there.  The fish god.  We have a friend, Kathy and Steve Abernathy, used to be at Brennan’s in New Orleans, and Steve’s the fish god.  I call him the fish god.  He raised tilapia. I went down and I visited the fish farm. I’d never been to a fish farm before. So I went down there, I landed New Orleans, had to drive all the way across Lake Pontchartrain to get to the fish farm.

These tilapia, these giant, giant circular tanks, and any time you would move, those fish would try to swim away from you.  They could see you, and they were afraid of you.  We weren’t gonna do anything to ’em except eat ’em later, which I guess they knew. And the fish god went on to tell me about how he genetically modified them and changed the sex so that he would have more female tilapia laying eggs so that there would be more hatched and more fish to sell.  So when I found out he could change the sex of a tilapia, I started calling him the fish god.

So, anyway, they had some damage. The fish tanks didn’t suffer any, but some of the buildings where their office supplies are housed had like three or four feet of water in them. And there’s all kinds of people that have lost their homes and everything they have is gone. And they’re largely white, and you know that skin color matters in this country, more maybe than it ever has.  And you know how everything has become politicized in this country.  Some people don’t want to acknowledge or admit that.  But it has.

But it’s a late, late arrival for the U.S. government on the scene in Louisiana no matter who goes.  But I do think it’s a relevant question to ask about. How about if Hillary did order her foundation to go do some work in Louisiana?  Imagine the photo-op and the goodwill she could get out of that here in the midst of a presidential campaign, and they’re seeking not to do it.  And not just in Louisiana, but some other places, too.  And I think the reason is because they don’t want to establish the precedent that the purpose of that foundation is to pay out a lot of money.

How many of you people have actually looked into establishing a foundation.  Anybody can.  Anybody can do it.  And a lot of people who do it do it as a means of making bulk charitable donations for tax deduction purposes, in addition to whatever charitable work they want to do.  But let me just use a round number here, and I’m gonna be fairly close to how this works.  Let’s say you set up a foundation for a hundred thousand dollars, and if that’s what you put into your foundation, you get to deduct a hundred thousand dollars from your taxes that year and whatever your income tax rate is.

But the kicker is this:  You don’t ever have to put any more money in it, but you can, and you can go out and ask people to donate to it. You can run golf tournaments, anything you want, to have people donate to your foundation.  The kicker — somebody correct me if I’m wrong — you only have to donate 10% a year from it to keep it qualified as a charity. So you can horde all the money.  Now, theoretically you can’t use the money.  Once you’ve put it in there, it’s not yours anymore.

The only way it can be spent is for travel and expenses of the employees of the foundation, if you want to hire some — he-he-he — which is what the Clintons have done — or donating it.  But you can get a full tax deduction of whatever you fund that foundation that you’ve set up in a year, but you don’t have to give it all away every year to get the deduction.  You only have to give away five or 10%.  It may not even be that much.  And this is why I say the reason I’m guessing that the Clintons have not set this foundation up to be on site at every disaster is that they don’t want to establish the idea that the purpose of their foundation is to deal with charities.  They do it now and then, but that’s not why they’ve set this up.

Their charitable foundation is a Hoover.  It is sucking things up.  I mean, the crown prince of Bahrain and $32 million.  We mentioned this yesterday.  People say, “What could he possibly expect to get?”  Well, nothing from the foundation.  But if Mrs. Clinton either as secretary of state or becomes president, well, then who knows.  I mean, that’s what it’s for.  So the Drive-Bys running around saying, “There’s nothing to see here.  All they’re doing is providing access.  There aren’t any favors being done.”  The favor is the access.

Great to have you with us, my friends.  The question again needs to be asked, why is the Clinton Crime Family Foundation not offering help, aid, money, food, cell phones, to the devastated population of Louisiana?  An accompanying story.  “Clinton Rakes In $4 Million While Louisiana Drowns.”  This is the Daily Caller.  “Hillary Clinton has yet to set a date to visit Louisiana, which was recently devastated by historic flooding, but managed to raise millions in campaign contributions over the weekend.”

She found time to go on Jimmy Kimmel’s show.  You ought to see the video.  She’s so stiff and unfunny.  Here’s a classic joke that they set up, and she didn’t blow it, but it’s not executed well.  So Kimmel asks her what it’s like to be a grandmother.  “Oh, it’s just wonderful.  I don’t know where I’d be without FaceTime.”  And Kimmel says, “Oh, FaceTime instead of emails?”  The audience busts out laughing. Hillary fakes like she’s laughing, points at Kimmel, “Oh, you’re fun,” as though she’s in on the joke.

And the Drive-Bys are heralding this.  They’re saying Hillary’s got the guts and the temerity to go on there and has the ability to laugh at the circumstance.  But again, we have to keep in mind how the low-information crowd — and it’s the low-information crowd watching this show — how they see this, and they see this email thing being laughed about and made a joke of and therefore it can’t be anything serious because Kimmel’s audience, they’re pretty sure that if this were a serious thing, Jimmy Kimmel would be treating it seriously.  He’d been trying to bore in there and get to the bottom of it, but he’s laughing about it with her, so how big a deal can it be?

And then if you go elsewhere, it’s amazing — folks, this is amazing — I still don’t know how to take this.  No matter where you go in the Drive-By Media today, yesterday, last week, you can find near paranoia about this in certain Democrat circles.  You can find the Washington Post is paranoid about this.  The Politico has a story that this email thing, State Department, security, private servers, classified documents, they’re leftists writing that they are worried this is going to hound her for the rest of her political life. That she’s never going to be out from under this, and it’s going to undercut her effectiveness, her integrity, her honesty. 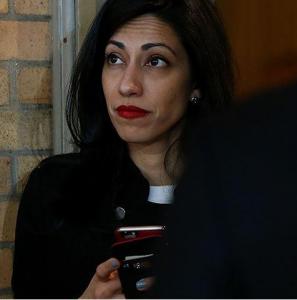 But she left the classified documents on the front seat and she realized, she called somebody, says (imitating Huma), “You gotta get over there and get ’em out of the front seat. You gotta put ’em in the trunk of my car.”  Classified State Department documents on the front seat of the automobile being driven by Huma Weiner and still there’s nothing that’s gonna happen here.  I can’t see it happening.  At least not in a legal-judicial sense.  Whether this ends up actually affecting her in the polls or on Election Day remains to be seen.