RUSH: Okay, so Trump is apparently softening his position on immigration.  That’s what the Drive-Bys are saying.  Trump is now saying, “Well, I don’t know about deportation. Well, we’re gonna talk about it. Well, some of these are really good people” And the Drive-Bys are just ecstatic ’cause they think Trump is totally reversing himself, and they think Trump is totally reversing himself on his number one issue, the only reason he has support, they think he’s committing suicide.  So the Drive-Bys went out and they started doing man-on-the-street interviews with Trumpists.  And they wanted to know, “How do you feel now that Donald Trump has sold you out?  How do you feel that Trump is maybe not gonna build a wall, that Trump is maybe not gonna deport?” And they’re not finding anybody mad at him.  They’re mad about that.

What they’re finding are Trumpists saying, “Well, you know, it’s not the primaries, it’s the general.  Gotta make some modifications, gotta do some changes here, gotta reach out to a little bit more people, totally understandable he might have to modify his position.”  Then the Drive-By, “You don’t think he lied to you, then?”  “No, no, not at all, he’s doing what he has to do to get what he wants accomplished.”  In other words, Trump’s supporters are not leaving him over this, at least here in the early stages of analysis.

The Drive-Bys thought for certain that they would.  You could see it the minute this story broke, the minute Trump said what he said that caused all this, you could just see the Drive-Bys salivating.  I mean, you could see the saliva literally dripping from the corners of their mouths down to the floor, they are so excited.  They thought there was gonna be a mass protest against Trump.  They thought that Trumpists nationwide were gonna rise up and abandon Trump and start getting mad and say, “See?  We can’t trust anybody.”  And it didn’t happen.  And it didn’t happen because they don’t understand the connection that Trump supporters have for him.  And there are many elements to that connection.

And I’m gonna tell you what one of them is.  And if there are any of you in the Drive-Bys listening now who really want to learn and really want to understand, I mean, really want to know, I’m going to give you a hint.  I don’t know what percentage of Trump supporters this applies to, but I know it’s big.  Are you ready?  I’m gonna say this very slowly so it has maximum impact.

Trump supporters don’t care what he does or what he says because there is no way they are going to do anything that helps elect Hillary Clinton.  It’s no more complicated than that.  There are many other reasons why Trump’s supporters support him, and I don’t know what percentage of the Trump support base represented by what I just said, but it’s a sizable number of Trump supporters.

And you Drive-Byers are looking for mass defections. You’re looking for people to be disappointed. You’re looking for people to think that Trump has sold ’em out, lied to them. You’re waiting for them to, in effect, come to Jesus and realize that they’ve been snookered from day one by Trump.  You’re not gonna find it.  Because this has been bigger than Trump, it’s about more than Trump. This movement that’s there, however big it is, existed before Trump came along.  Trump happens to be the guy, whether by accident or by design, who connected with this movement.  Again, unknown how big it is.

And this is something the Drive-Bys can’t understand, ’cause they love Hillary.  I mean, they’re Democrats.  They’re leftists like she is.  They think she’s due to be coronated.  They’re going to treat her like a queen if she is elected, and they can’t understand other people not seeing this.  So the only way they can chalk it up is, you people that don’t see Hillary for what she is, you’re just biased, you’re sexists, you’re bigots, you’re chauvinists, you’re numskulls, you’re idiots.

And the proof to them will be that even when Trump sells you out, in their opinion, you will not abandon him.  So there’s something wrong with you.  And they will never understand, I don’t think, just how fervent, just how solid the “no way Hillary Clinton as president” group of people is that’s supporting Trump.  Maybe even some of the Libertarians that are supporting other people, too.

RUSH: Let’s go to the audio sound bites and Trump.  Now, this was last night on Hannity.  It’s a town hall in Austin, Texas, with Trump.  And the question, “You seem to be, in the last week, revisiting the issue of immigration, sending everybody back that is here illegally.  Where do you stand on that now?”

HANNITY:  Start with them.

So Hannity says, “Well, is there any part of the law that you might be able to change that would accommodate those people that are here illegally who contribute to society, who have been law-abiding, who have kids here?  Would there be any room in your mind where you could maybe moderate a little bit, maybe not send ’em all back. Maybe keep the good ones. Keep the law-abiding, keep the productive, keep the parents, keep the kids, because I know you had a meeting this week with Hispanic leaders.”

ALISYN CAMEROTA: Donald Trump says he may be, quote, “softening” his hard line stance on immigration. 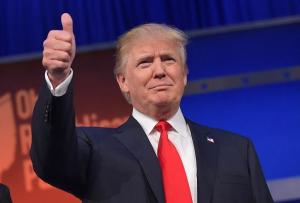 ANTHONY MASON: He may be willing to soften his plan for mass deportations.

HALLIE JACKSON: He might soften some of his immigration positions.

RUSH:  Where did Trump ever say “soften”?  I’ve got two sound bites here, and I don’t find Trump using the word.  Did Hannity use the word?  What’s that?  Yeah.  Okay, there certainly can be some softening, all right, there it is.  So they picked up on it, gonna soften here, soften there, and they think it’s a flip-flop.

They think Trump’s people would be abandoning him left and right. As I say, they’ve been out there doing man-on-the-street interviews trying to figure it out, and they can’t find any Trump supporters, not any significant number, anyway, who are abandoning Trump over this.  And they thought that was going to happen.