This Is Why You Don’t See Hillary Much

RUSH: I think we’re beginning to see why.  Did you see the two episodes of Hillary coughing in Cleveland? One at the plane and one at the appearance in Cleveland.  People are joking about this.  Obviously a presidential campaign and people are having fun with it.  But something’s not right here.  There’s something that’s potentially really, really wrong.  In fact, I’m gonna tell you something, after I watched the videotape of Clinton in Cleveland, I actually started asking myself, “Who on her staff allowed that to continue?  Who put her out there?”

I mean, her only recovery line was (imitating Clinton), “Yeah, it’s allergies, this happens to me every time I think of Trump,” and there was moderate laughter and applause.  I think we know why she is sequestered.  I think we know why she is — well, she’s sequestered for a host of reasons, but this is clearly one of them.  And I really was curious, you know, who put her out there? I guess they figure at some point we gotta put her out there.  We can’t continue to hide our candidate weekend after weekend, week after week after week.

But if you haven’t, by any chance, seen it, we have the audio coming up, and it takes four minutes to go through this.  It is a painful four minutes to watch.  And I think listening to it without seeing it may even have more impact, because you will paint the picture of what she looks like in your mind as you listen to her cough.  I will set the stage for you.  She’s at the podium; she’s smiling. She’s not wearing a house coat, by the way — another curious choice by the campaign staff.  That house coat… You know, with the four Captain Kangaroo pockets?  It’s just… It’s strange, strange stuff.

It looked like she had a lot of tacos this weekend, when I was watching the coughing video.  But whoever decided to put her out there, they must be… Folks, I’m telling you, at the Clinton campaign, I don’t think it’s all sweetness and light and roses and sunshine and upbeat/positive.  They haven’t put her out there. Her numbers are going down. Trump is… It’s a combination.  Trump’s catching up and she’s losing ground.  Two things are happening.  And in some of the polls, Trump isn’t gaining any ground at all. Hillary’s losing it.

But no matter how you look at it from the Clinton camp, there is reason for serious, serious concern.

RUSH:  Okay, we gotta spend a little time on Hillary here, folks, as we get serious.  The FBI document dump.  There’s a lot of other news, things circulating about Hillary that you’re not gonna hear in the Drive-By Media. But I want you to hear about it. I want you to know about it.  Some of it may end up being forced into the mainstream media news cycle, and I want you to be up to speed on it.  I want to start with the first coughing sound bite, which was yesterday in Cleveland during a campaign event.  This bite is 3:24.  The whole thing is over four minutes.

All of it is Hillary unable to stop coughing.

I can’t believe that Tim Kaine let this go on and didn’t take the mic from her, didn’t try to take over.  I can’t believe they sent her out in this condition.  Something is clearly not right.  I’m not a doctor; I’m not gonna pretend to be one here.  All I know is, I’ve had hacking coughs and I’ve had them diagnosed, and there’s always been reasons for them that are related to respiratory problems.  Hers supposedly aren’t. Supposedly, there’s nothing wrong with her respiratory system.  It’s her thyroid and immune system and so forth, at least as far as anybody can guess.  But just listen to this.

We’re not gonna have time to get this all in, which is kind of like the point.

RUSH:  What is going on here?

RUSH:  Okay.  Stop the tape.  We’re only halfway through this, and there’s another one behind it here, and it’s… I don’t know how to describe this.  Something is clearly not right, and they made no effort to stop this or cover it up? Well… Well…

RUSH:  You know, I made a mistake when I said that the Hillary campaign didn’t do anything to cover for her during that coughing spasm fit — which went on for 4-1/2 minutes, by the way.  You heard two minutes of it there before we had to go to the break, maybe two and a half.  It went on another two minutes.  It was identical to that for easily 4-1/2 minutes.  And nobody made any effort to rescue her.  Somebody came out… She had a bottle of water or a glass of water.

Somebody came out and gave her another container of some liquid that she drank from. Not the water that she had. But aside from that there was no help extended.  Tim Kaine was standing right behind her.  The one thing you need to know is the Drive-Bys have not shown this.  MSNBC, in fact, backed out of it, in the middle of it, and they didn’t call attention to it.  “And that’s Hillary Clinton with her campaign appearance in Ohio here, the latest news here MSNBC,” and they moved on to something else.  There was no remark on it, no comment with it.

This is one of these things you’re gonna be running around saying, “How can anybody not be concerned about this?” And your answer is: A lot of people haven’t seen it.  Now, to whatever extent we’re making sure millions hear it here.  Fox News has aired it. It’s reverberating in certain corners and sectors of social media.  But there was another instance. You know, Hillary’s got a brand-new campaign plane, unveiled for the rest of the campaign this weekend.

It’s Boeing 737 that has been outfitted the specifically for her, paint job specifically for her, and the the maiden voyage took place. She had the media on it and she went back to the back of the plane to talk to the press and everybody says, “See, she talks to the press! She talks to the press! She talks to us.” And the kind of questions she got were, “Do you like the plane?”  “How are you doing?”  “Boy, it’s great to see you!  Are you happy to see us?”  That’s the extent of it.  But she at least took some questions, and she had to cut it short because of coughing and the need to drink some water.

HILLARY:  He seems to have this bizarre attraction to dictators, including Putin.  He won’t tell us where he owes $650 million.  There’s a lot of rumors about that. Ahem. And… (cough) (cough) He has, you know, made it clear that he doesn’t particularly care whether Putin and the intelligence services attack American institutions. So… (cough) Can I get some water?

RUSH:  Folks, this is… There’s something clearly wrong here.  We have heard this cough and seen this cough for months now.  This is not due to a respiratory thing that clears up in a few weeks.  Now, I have had… One time in my career, I had a hacking cough that was due to a postnasal drip. It took months to diagnose it, and it felt to me like I had a perpetual cold, and I’m talking for six months.  And it was… I was hoarse. Not like this. I mean, my coughing was not anywhere near like this, but the point is they were able to pinpoint a reason.

Hillary’s cough reportedly has nothing to do with the respiratory tract.  It’s to do with perhaps early onset Parkinson’s or something to do with the thyroid.  All I know is that Drew Pinsky had a show on Headline News, and he got fired. He’s a doctor, and he expressed grave concern for her as a doctor.  Now, he admitted he hadn’t diagnosed her, but he expressed grave concern, and they got rid of him.  So they’re keeping this close to the vest, and the Drive-Bys are trying to cover it up, clearly.  You have to go searching for this. 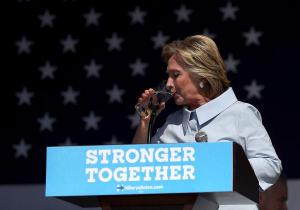 This is not in anybody in the Drive-By Media’s news cycle.  But when you hear this — and believe me, hearing it is just as powerful as seeing it.  I mean, you know what somebody looks like when they cough.  She’s turning away from the microphone when she coughs, and she just can’t stop.  You couple that with all these other things like we don’t see her for days at a time, and they tell us, “Well, she’s resting and recuperating.” From what, we don’t know.  People have written me and said, “Rush, imagine…

“Just suppose for a second there’s something seriously wrong.  Why in the world would she risk her health to pursue this presidency to campaign like this?”  Now, I can’t answer that, because I don’t have the obvious lust for power that these people do — and I think in the Clintons, it’s off the charts.  I don’t know the psychological makeup of it. But I’m telling you, there’s something that sounds really, really drastically wrong, and I do wonder but the people who are close to her and who know and are still subjecting her to this.

Now, admittedly she runs the show. She’s Nurse Ratched. So even if there are people trying to caution her and slow her down and protect her, she may be telling them to go to heck, that she’s got a campaign to run and she’s gonna go out there and she’s gonna tough it out or what have you.  But whoever, they’re not putting her in the best light by any stretch.  She has no issues to run on.  She’s… I mean, she didn’t have time to get to an issue in this coughing spasm!  She barely… She didn’t even finish thanking all the so-called Democrat dignitaries that were there.

She never got into any substance whatsoever here.