Trump Used My Line: She’s Been There 30 Years and Has Nothing to Show for It

RUSH: I want to start with this. I was really jazzed, I must admit. I was jazzed last night when Trump — and this was early on in the debate. Even the Drive-Bys were concluding that Trump owned the first 20 to 30 minutes.  And, if you’re gonna own a segment of the debate, it’s not bad to own the first 20 or 30 minutes.

But when I heard Trump say this about presidential experience, Kathryn is sitting right next to me; I just put my fist in the air and went, “Yes!”  Here’s what happened…

HILLARY:  Well, actually, I have thought about this quite a bit.

RUSH:  Big point of mine, and has been all summer long: Hillary Clinton’s been doing this for 30 years, and it struck me, you know, she’s running for the Democrat nomination, and she’s running against the last eight years that she was a part of.  I mean, in order for Hillary Clinton to be elected president, she’s got to find something wrong with the status quo, which she was part of — and she was! She was ripping into the economy.  But just like last night, Hillary Clinton’s been running on “taxing the rich” for 30 years.  Ditto, her husband.

Hillary Clinton has been running on trickle-down didn’t work, “We tried that, we tried that trickle, it was a disaster, and we can’t go back to.”  The Clintons have been saying this for 30 years.  Trickle-down did work.  Trickle-down is what everyday economic activity is anyway.  Reaganomics did work, and it’s time that we headed back in that direction where the economy grew because it grew; not because the government was stimulating it in false, phony ways by just transferring money around.  We don’t have any real economic growth now.

We’ve got real government growth — and while we’ve got real government growth, here’s Hillary Clinton for 30 years saying, “Trickle-down doesn’t work! The rich aren’t paying their fair share,” all of this standard operating procedure blue book, playbook stuff.  But the realization that I have is it’s 30 years, and she’s still complaining about the same old things! It’s 30 years, and she is still proposing the same old things.  Thirty years, and none of what she has proposed has worked.

And people talk about her experience and people talk about her brilliance and all this other stuff.  To me, 30-year track record of nothingness.  How in the world can anybody look at her record and say there have been improvements in any?  She botched health care.  I could go down the list.  Anyway, I wanted to find out when I first started mentioning this, so I had Cookie do an archival search of the archives of this program. They don’t go back too far, just this year, and the first known reference is May 31st on this show.

RUSH ARCHIVE:  She’s the Smartest Woman in the World. She’s the most qualified person to ever run for the presidency. She’s known and adored by Americans for over 25 or 30 years.  How can it be that she’s struggling to find her footing?

RUSH:  And next one, July 29th right here on this program…

RUSH:  And nothing to show for it but more complaints, more acknowledgment of distress.  Hillary feels your pain.  She knows exactly what you’re going through, while 30 years of telling you she gonna fix it, and nothing’s fixed.  Why is that?  So I was cheering last night when Trump brought this up.  I thought that, ’cause I think obviously since I said it, I think it’s a very persuasive point.  Now, we’ve got another mention of it all the way back on August 11.  Now, this whole thing’s five minutes.  I’m not gonna run the whole five minutes here of me, but I want you to get enough all of flavor of this understand what I’m really talking about here.

RUSH ARCHIVE:  I think Mrs. Clinton disqualifies herself on the very basis of her 30-year record.  Thirty years, nothing to show for it, other than a bunch of accolades about how much she cares, how much hard work she has put into caring.  But, seriously, 30 years!  Why do we still need to build roads and bridges? Thirty years! Why do we still need a jobs summit put together by the White House?  Why, after 30 years, and many of these years run by the Democrats, why haven’t these ideas worked?

Why is Mrs. Clinton even needed?  Why aren’t we reveling in so much joy and happiness and prosperity?  Why can’t she just retire with the legacy of “job well done”?   Instead, we get a Hillary Clinton after 30 years in government complaining about the things she was complaining about when she was running as first lady, when she was handling bimbo eruptions and when she was handling Hillarycare. Why, after 30 years, is there not a shred of evidence that what she believes and what she has helped to implement worked?

Therefore, why is there such blind support for this woman, who cannot point to a track record at any time in her 30 years saying, “Give me the full boat. Give me the White House. Give me all the power, and I’m gonna build on what I’ve done to date.”  She can’t even say that, because there’s nothing to build on.  We are at a permanent state of decline, and we’re being told to accept it, that that’s our new norm. That our best days are behind us, and we can’t hope to recapture ’em because our best days behind us were actually kind of phony.

Yeah, they were built on a false premise that we were a superpower.  But we really weren’t.  We were racking up all this debt. We had to pay the credit card off that Reagan ran up like crazy.   That’s what they told us.  Why, after 30 years, can Hillary Clinton not point to anything in her career and say, “Remember when I did that?  Well, give me the full boat and let me really make it happen.”  She can’t do that.  Why?  Why does Hillary Clinton’s 30th year in public office sound identical to her first year?

Same complaints, same acknowledgments of problems, same rotten people, same rotten corporations.  Why haven’t they been put in jail?  Why haven’t these evil corporate guys finally been punished for all of the drugs that they’ve put on the market to kill people and make people sick? Why are they still roaming free?  Why is there still global warming, why is there still climate change?  For 30 years Hillary Clinton and the Democrats have been warning us and telling us that big corporations and people wasting energy are creating this situation we’re gonna destroy the planet. 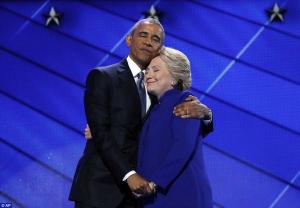 Her public resume is one of failure.  No, she cares. I don’t know how much she cares. They say she cares a lot, cares about kids, love kids, done more for kids than anybody in America.  Show me the evidence.  Show me where caring accomplishes anything.  I care about a lot of things.  Doesn’t get ’em done.   So why isn’t her 30-year track record, her 30-year resume, why isn’t it seen for what it is?  Abject failure.  Lack of any appreciable accomplishment in the areas of her agenda that she promotes and has been promoting.

Why has the only thing that’s really changed in the last 30 years of Hillary Clinton being in public life, that she and her husband are now worth $300 million?   They’ve done pretty well.  Nobody else has that they’ve been trying to help or caring about.  How is it that’s the single greatest thing of note about Bill and Hillary Clinton is their personal wealth accumulation, in their 30 years in public life earning government salaries?  If you ask me, her political life is the greatest disqualifier of her candidacy that anybody could come up with.

RUSH:  Well, I said I wasn’t gonna play the whole thing, but I decided I would, it sounded so good.  I said, “Why stop this?”  ‘Cause that spells it out, folks.  That is it in toto what I mean and have meant by 30 years and what is there to show for it, other than her wealth?  Anyway, I was happy to see Trump use it.  I think it’s something he should keep using, and I think it’s a winning premise, and it’s just waiting to be developed out there.