The Elites at Al Smith: Have You Ever Seen a Bigger Group of Uptight People?

RUSH:  Now, what are we to make of this?  Timothy Cardinal Dolan says that Trump and Hillary were civil in private.  The Al Smith dinner last night.  (laughing) You know what?  Folks, we’re gonna be getting into this in more detail as the program unfolds, but you know who was in that room last night? In that room was the New York establishment and the elites.  They all must have been wearing corsets and whatever else to constrain movement.  I never saw a bigger group of uptight people in my life. 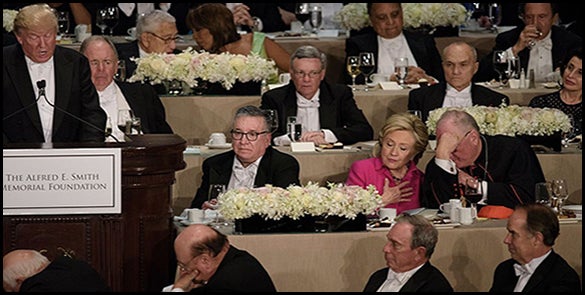 I kept hearing at the Al Smith dinner, self-deprecating humor, right?  It means you’re supposed to make fun of yourself and make fun of others.  But they cannot handle it.  They don’t think anything is funny, particularly if it’s about them.  And their reactions are just off the charts, like booing Trump and demanding he get off the dais last night for quoting what Hillary has said in these emails.

RUSH: Bob in Spokane.  Great to have you on the program, Bob.  How are you?

CALLER:  I can fully understand why yesterday you were beside yourself and right up toward the limit.  Here we have these people who present themselves as guardians of the sanctity of the results of elections. And now we know they’re getting rent-a-mobs and with the accomplices in the media trying to overturn an election and make it look like the 80% who said “yes” are a bunch of loons and they’re in the right, in the majority.  And they thump their chest talking about, oh, the sanctity of elections and what you promise to follow it, and in the background they’re doing exactly the opposite.

RUSH:  Exactly right!  They’re the ones monkeying with it all, like —

RUSH: — this guy Creamer at Obama headquarters at the Clinton campaign, they’re the ones.  I’ve got a story here you’re not gonna believe coming up right after your call.  But I want to expand on something.  What he’s referring to is yesterday I really was, even for me — folks, I am normally a reserved — I have my energy, and I have my days where I will raise my voice, but yesterday I was barely able to stay within my own boundaries, ’cause I just found it incredible that no one, not a single person at any of the TV networks, at any of the cable news networks, at any of the newspapers and their websites and blogs, not a single person allowed for the fact that Trump was engaging in showmanship.  That Trump was sending a message to his supporters and trying to keep ’em bucked up.  Not every single one of them thought that Donald Trump was actually going to try to get the military on his side and launch a military coup if he lost the election.  And I don’t know what it takes to believe that.

All Donald Trump said was that he was going to wait until the election to decide whether or not it makes sense to take a look at it.  And knowing what he knows and what we all know about the WikiLeaks emails and the Project Veritas video and so forth, it’s the only common sense thing to say.  But they went out and said that Donald Trump said he will not accept the results, and they’re out there saying it’s the first time in American history that somebody has actively said they will not accept the results.

He didn’t say that.  It’s not what’s gonna happen.  The willing suspension of common sense here is breathtaking to me.  But this is what I keep referring to today as the teachable moment.  It is highly instructive.  There’s gotta be some fear that is behind all this.  There’s gotta be a lack of confidence on the Hillary side or the establishment side, wherever you want to characterize it, there’s got to be some real fear here that this may not go the way they all want it to go and they’re telling us with their polls and everything else how it is gonna go. 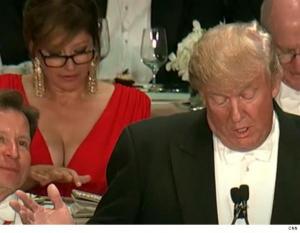 I’ve never seen so many people so uptight.  I’ve never seen this kind of inability to apply any kind of common sense and to react hysterically.  There was a national media hysteria, and it’s still going on over this.  It’s not warranted, it’s way out of proportion, and it’s got to stand for something.  There’s got to be a reason for it, and I think it’s fear, maybe some other things rolled in.

RUSH: I’ll tell you this Al Smith dinner, one thing, Trump had no chance.  Did you see the people?  Who was in that room?  Every damn person in that room except for Rudy Giuliani, every damn one of them looked like the biggest tight ass I have seen in I don’t know how long, and it’s New York.

And you may not know this, but New York doesn’t like Trump.  He’s from Queens.  He’s from Queens.  He’s not from Manhattan.  He doesn’t have a place in the Hamptons, if you note.  Westchester, over in New Jersey, but he doesn’t have a place in the Hamptons where all of them go.  Trump is an interloper in Manhattan.  Trump is gauche, he’s embarrassing, he flaunts his wealth with all the gold leaf in his penthouse apartment and his model wife and so forth.  These are people who read the New York Times and believe it every day.  You think they’re gonna laugh at something at the Donald Trump speech?  These people wipe themselves with the New York Times and it’s an honor when they do it.

They’re sitting there, they’re politely chomping on their food and then Trump says something, you can see they want to burp and belch, and some of them, “Get off the stage, you’re embarrassing.”  What did he say?  I don’t have the exact words, but he said, “I find it strange here we’re at a Catholic charity sitting with Mrs. Clinton who doesn’t even like Catholics.”  Ooh, you’re not supposed to say that.  Why not?  Well, it just isn’t proper.  What if it happens to be true?  Well, it hasn’t been in the New York Times so it can’t be true.  But it’s in the WikiLeaks email dump.

Her whole campaign makes fun of and mocks the Catholic Church.  The whole Democrat Party has assaulted the Catholic Church politically.  And Trump can’t point it out?  Nope, can’t point it out.  Violation of protocol, violation of decency, violation of standards.  Even people on our side would say the same thing.  It’s just beneath the dignity of the people who attend the Al Smith dinner.  You just can’t do it.  You’re supposed to make fun of yourself.  You’re not supposed to make fun of other people.

But I mean just looking at some of these people — I’ve watched previous Al Smith dinners.  George W. Bush in there making jokes about himself, about his lack of intelligence.  They loved it.  Of course they’re gonna applaud that.  Did it get him elected?  Did they walk out of there thinking, “Man, we didn’t know this guy was such a great guy.”  No.  They hate him just as much as the moment he walked in.  He behaved as he was supposed to.  He did great self-deprecating humor, and he played the type.  He let everybody know he’s an idiot.  That’s what they wanted to hear.

You gotta remember who’s in this audience.  It’s not so much the Catholic Church.  Al Smith is a Catholic charity dinner, but these are the people, I’ve been to their dinner parties when they tap me on the chest, “What are you gonna do about the Christians?”  These are the people that take me over to the window and point out to Central Park and say, “When are you gonna help us get rid of the guns?”  That’s who’s in there.  It’s who it is. (interruption)  What, do you think I’m going too far here, Mr. Snerdley?  It’s the New York elite, folks, that’s exactly who they are.  And Trump is no different than a bull in a china shop last night.

RUSH: I want you to hear this sound bite from Trump last night at the Alfred E. Smith Memorial Foundation dinner.  Remember, now, most of the people this crowd resent the fact that Trump even showed up.  They’re like everybody else in the establishment — they’re New York elites — the New York Times even referred to the audience as New York elites in its headline.  They’re not even happy Trump is there.  Well, except for Rudy Giuliani.  He was there.  Here is just one. It’s about 54 seconds, so we got time squeeze this in.

TRUMP:  How corrupt do you have to be to get kicked off the Watergate commission?

TRUMP:  Pretty corrupt.  Hillary is and has been in politics since the seventies.  What’s her pitch?  The economy is busted, the government’s corrupt, Washington is failing, vote for me, I’ve been working on these problems for 30 years.  I can fix it, she says.  We’ve learned so much from WikiLeaks.  For example, Hillary believes that it’s vital to deceive the people by having one public policy�

TRUMP: … and a totally different policy in private.  That’s okay.  I don’t know who they’re angry at Hillary, you or I.  For example, here she is tonight in public pretending not to hate Catholics.

RUSH:  They never boo at this. Folks, they never boo at this dinner! The reason they are booing is because Trump didn’t follow protocol.  He came in there and campaigned.  And you’re not supposed to do that at this dinner.  You’re supposed to make fun of yourself and tell everybody in there, particularly if you’re the Republican, what a joke you are, and he didn’t do it.  He got booed, and I bet it was an honor.