RUSH: It was from the Project Veritas videos of James O’Keefe that we were able to inform you of a man named Robert Creamer.  May I briefly review.  Robert Creamer is a ranking Democrat dirty-tricks operative.  He is married to Jan Schakowsky, who is a Democrat member of Congress from Illinois.  He is a Saul Alinsky disciple.

During the Obama administration he has visited the White House 350 times.  Forty-two times Robert Creamer has met with President Obama in the Oval Office.  Robert Creamer is tied to the Clinton campaign and the dirty tricks of buying and paying for homeless people and other protesters to show up at Trump rallies and provoke violence.  It is Robert Creamer who’s been caught on tape explaining how it was done, how it was paid for, and who ordered it done.

It was the Clinton campaign.  He’s the guy, when they wanted to disrupt a Trump rally, it was this guy Robert Creamer that got the call.  He went into action using Alinskyite tactics, getting hold of homeless people and others, basically rent-a-mob and paying them X-amount of money, printing up T-shirts that were designed to provoke Trump rally supporters and hopefully to cause violence to that they could then, using the media, blame on Trump supporters. 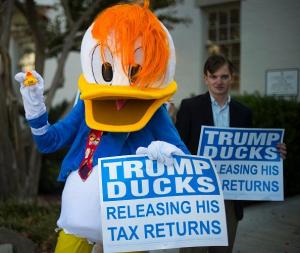 Well, this latest video from James O’Keefe documents that it was Robert Creamer who did it at the specific request of Hillary Clinton.  So all of this stuff is supposed to appear organic.  You as a watcher, you as a viewer of TV, you watch the Trump rally and you see all these agitated people and there are signs and they’re provoking violence and dressed up as Donald Duck and they’re all running around talking about what a rotten guy Trump is.  None of it’s real.  It wouldn’t have happened if the Democrats hadn’t paid for people to do it.

RUSH:  That’s Robert Creamer, 350 visits to the White House, 42 to Obama’s office, the Oval Office, admitting, “In the end it was the candidate, Hillary Clinton, the future president United States who wanted ducks on the ground. So by God we’ll get ducks on the ground.  Don’t repeat that to anybody.”  Look, just documenting for you that none of these protests are real.

And I would go out on a limb and say that well over 80% of the so-called protests, Ferguson, Baltimore, some of it’s real but the vast majority of it is fake, the vast majority is contrived.  It’s paid for.  It’s designed.  It’s scripted.  All made to look natural and organic.  We are being manipulated, our minds and our opinions and our attitudes in ways that we don’t even know.  We might suspect.