Rush Limbaugh, the “Doctor of Democracy,” is known as the pioneer of AM radio. Limbaugh revolutionized the media and political landscape with his unprecedented combination of serious discussion of political, cultural and social issues along with satirical and biting humor, which parodies previously “untouchable” personalities and topics. His passion inspires millions of Americans to be the best they can be and keeps the country on course to a bright future.

In 1988, Rush launched his phenomenally successful radio broadcast, The Rush Limbaugh Show, into national syndication with 56 radio stations. Now, 31 years later, the show is heard on more than 600 stations by up to 27 million people each week and is the highest-rated national radio talk show in America. On February 5, 2020, at the State of the Union Address, President Donald Trump awarded Rush the Presidential Medal of Freedom, our nation’s highest civilian honor. Rush has also received the Marconi Radio Award five times, and has been inducted into the Hall of Famous Missourians, the Radio Hall of Fame and the National Association of Broadcasters Hall of Fame. 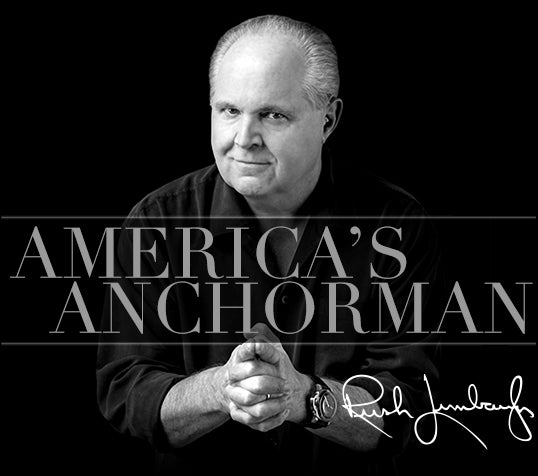 Rush Hudson Limbaugh III was born in 1951 in Cape Girardeau, Missouri to a family with a long line of attorneys. At 16, he chose to explore his passion for broadcasting by working as a disc jockey for a hometown radio station. After four years, he left for Pittsburgh to work for the former ABC owned and operated KQV. Tired of the disc jockey life, Rush briefly left broadcasting for business, joining the Kansas City Royals as Director of Group Sales, and later as Director of Sales and Special Events.

Rush couldn’t resist the urge to return to broadcasting. In 1983, he re-entered radio as a political commentator for KMBZ in Kansas City. A year later Rush hosted a daytime talk show in Sacramento, California, tripling the program’s ratings in four years. From there, in 1988, he went on to New York where the record-breaking national show was born.