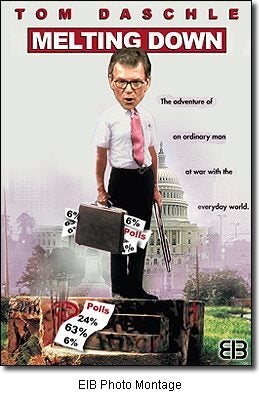 The program observer, Mr. Snerdley, observed something from the clips we played that I think is quite poignant, brilliant and perceptive. This is a point we should watch for someone in the mainstream press to make. Maybe we’ll see this EIB sequel to Falling Down titled Down.
It is in the personage of Senator Daschle, that the angry white male has miraculously returned. He has reappeared on the scene six weeks before the election of 2002. Yes, the angry white male is back. Will the press note this? Mr. Russert? Brian Williams? My buddies at NBC? This is more than “Tommy’s tantrum.”
When you look around the nation, from sea to sea, coast to coast, mountain range to mountain range, ghetto to ghetto and rich neighborhood to poor neighborhood, you won’t find many angry white guys. But if you’re looking for angry white guys in Washington D.C., you don’t have to leave the confines of the nation capital.
Would you call this sort of foot stomping the behavior of an alpha male? No! This is a little puppy dog looking for his mom. He’s five-weeks-old, Tom Daschle, and he can’t find a teat so he can suckle off your tax dollars. Yes, he’s the angry white male: Tom “Puff” Daschle. He’s reappeared for the campaign season, and he’s after your vote.