Tonight, many thousands of children are tragically learning to live without one of their parents. And the rest of us are learning to live in a world that seems very different than it was on September the 10th. 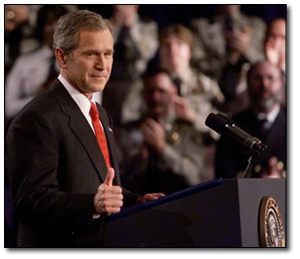 The moment the second plane hit the second building – when we knew it was a terrorist attack – many felt that our lives would never be the same. What we couldn’t be sure of then – and what the terrorists never expected – was that America would emerge stronger, with a renewed spirit of pride and patriotism. &lt;b>(Applause)&lt;/b>
I said in my speech to a Joint Session of Congress that we are a nation awakened to danger. We’re also a nation awakened to service, and citizenship, and compassion. None of us would ever wish the evil that has been done to our country, yet we have learned that out of evil can come great good.
During the last two months, we have shown the world America is a great nation. &lt;b>(Applause)&lt;/b> Americans have responded magnificently, with courage and caring. We’ve seen it in our children, who have sent in more than $1 million for the children of Afghanistan. We have seen it in the compassion of Jewish and Christian Americans who have reached out to their Muslim neighbors. We have seen it as Americans have reassessed priorities – parents spending more time with their children, and many people spending more time in prayer and in houses of worship.

We have gained new heroes: Those who ran into burning buildings to save others, our police and our firefighters. (Applause) Those who battled their own fears to keep children calm and safe – America’s teachers. (Applause) Those who voluntarily placed themselves in harm’s way to defend our freedom – the men and women of the Armed Forces. (Applause)
And tonight, we join in thanking a whole new group of public servants who never enlisted to fight a war, but find themselves on the front lines of a battle nonetheless: Those who deliver the mail – America’s postal workers. (Applause) We also thank those whose quick response provided preventive treatment that has no doubt saved thousands of lives – our health care workers. (Applause)
We are a different country than we were on September the 10th – sadder and less innocent; stronger and more united; and in the face of ongoing threats, determined and courageous. (Applause)

Our nation faces a threat to our freedoms, and the stakes could not be higher. We are the target of enemies who boast they want to kill – kill all Americans, kill all Jews, and kill all Christians. We’ve seen that type of hate before – and the only possible response is to confront it, and to defeat it. &lt;b>(Applause)&lt;/b>
This new enemy seeks to destroy our freedom and impose its views. We value life; the terrorists ruthlessly destroy it. We value education; the terrorists do not believe women should be educated or should have health care, or should leave their homes. 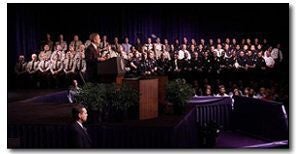 We value the right to speak our minds; for the terrorists, free expression can be grounds for execution. We respect people of all faiths and welcome the free practice of religion; our enemy wants to dictate how to think and how to worship even to their fellow Muslims.
This enemy tries to hide behind a peaceful faith. But those who celebrate the murder of innocent men, women, and children have no religion, have no conscience, and have no mercy. &lt;b>(Applause)&lt;/b>
We wage a war to save civilization, itself. We did not seek it, but we must fight it – and we will prevail. &lt;b>(Applause)&lt;/b>