Am I Alone Here? 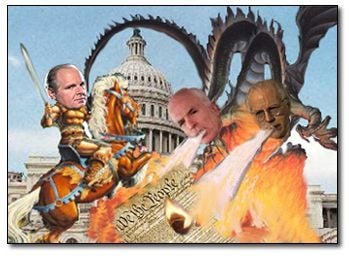 It’s really disgusting. I guess they don’t care because they know they’ll get more power from this bill. Equally disappointing is the lack of leadership from the White House. A lot of people in Washington are gutless on this. They want to vote for it because they’re afraid one of their opponents will some day say they voted against CFR.
The answer to that would simply be, “No, I voted for free speech,” but these reps. without gonads don’t want to risk it. They figure they don’t have to, because the Supreme Court will bail out their spinelessness.
That won’t necessarily happen, and with an issue as important as the First Amendment, why would we want to wait the years it’ll take for the case to get to the high court and depend on whatever justices are there to decide this? On , George Stephanopoulos said that the Supreme Court may overturn the 60-day issue ad provision. I don’t think any of these people feel threatened by this bill. They don’t seem to see how this bill will gag real people.