Dumb at the DMZ? 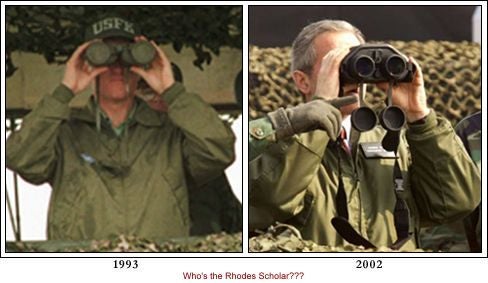 Remember when Bill Clinton went to the North Korea-South Korea Demilitarized Zone? As you can see above, he was looking into binoculars the lens caps. What is amazing is that he knew obviously that the lens caps were on, but he had to fake it, because to be seen taking the lens cap off after having had the binoculars to his eyes would have not been a good photo-op, and Clinton lives and dies by the photo-op. So the guy just continued to stand there and look through those binocs with the lens caps on!
Well, on Tuesday night, almost ten years after the Clinton trip, President George W. Bush visited the DMZ – and he got it right. Bush looked through the binoculars with the lens caps . We posted both pictures on the RushLimbaugh.com homepage prior to the show’s kickoff, and if you visited us (as you should throughout the day to see if we’ve added any important tidbits), you saw this A-B, side-by-side comparison.
As you look at this striking comparison, keep in mind that we’re told that one of these two people is a brilliant Rhodes Scholar – even though he never completed the course of studies. Keep in mind that we’re told that one guy is smarter than the rest of the room, and that we were fortunate just to have had somebody with this intellect leading us. Yet that’s the guy with the lens caps on his binoculars!
The other guy? He’s said to be a frat boy idiot who doesn’t even know where he is when he’s at the DMZ. But he has the lens caps off. It’s enough to make you question the media templates of Bush as a dope and Clinton as a genius – at least, we hope it is.