That’s what I told you by way of explaining this, that the White House is building these coalitions with people ideologically different than they are, rather than creating a large and growing base of comprehending, understanding, energized supporters. The president admitted this bill was flawed, but hoped that could be “worked out later.” Now, that sounded really familiar, because this CFR was passed after Clinton’s impeachment, and the previous CFR bill was passed after Richard Nixon’s resignation. 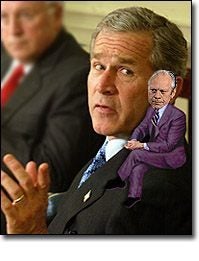 What President Bush said with the 2002 bill mirrors what President Ford said when he signed the 1974 Federal Election Campaign Act. Said Ford, “Today I’m signing into law the Federal Election Campaign Act amendments of 1974. By removing whatever influence big money and special interests may have on our federal electoral process, this bill should stand as a landmark of campaign reform legislation.” Sound familiar?
It’s the same exact reason we passed this bill! And guess what? The Supreme Court found the same limits on the amounts that can be contributed to candidates in federal elections, and the amounts that those candidates can expend in their campaigns, unconstitutional by a 6-3 margin in in 1976. So the ’74 bill was passed because of Nixon, and today’s was passed because of Bill Clinton.
And neither bill will do what it purports to do – yet they passed because of the label “reform.” This is not reform. There’s nothing successful about either of these two bills, and yet the people who are in charge of them and behind them are running around receiving accolades as reformers.