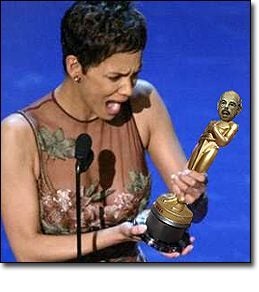 Well, based on last night’s speech by Halle Berry, I think there’s probably less racism in Selma, Alabama, than there is in Hollywood. If we are to take her at her word, then there’s less racism in the Deep South than there is, even today, in Hollywood. This poor woman suffered in silence for 12 long years at the hands of the whitest, most leftist place in America, perhaps excepting Berkeley, and Boston. This is Henry “Nostrilitis” Waxman’s district, after all. This is where Barbara Boxer goes to get a lot of her campaign cash. This is where Bill Clinton’s support runs deepest.
Look at the spectacle of Julia Roberts. This is quite telling, too, because we’re talking about a true dunce here. We can be honest. We’re talking about a black hole of intelligence here. But she is arguably the most powerful woman in Hollywood, box office-wise. When was the last time she was in a movie where a black had a major role? It was the waaaay back when, and one black guy playing Sammy’s part in . She has the clout to determine who her leading men are going to be, so why doesn’t she use it?

It was the same thing with AIDS. These people get away with making it look like what they’re doing is somebody else’s fault. Meanwhile, when that disease hit, gays in Hollywood who were in the closet stayed there, because they feared never getting work. No straight actor wanted to kiss a gay actor, didn’t want to run “the risk.” They were the biggest homophobes in the country.
Oh, but they put on those red ribbons, man, and just erased all that. They got credit for having all of the progressive compassion in the world.
I can’t get past this. I think it’s funny. I can’t get over it. This was a spectacle, folks. White millionaires by the thousands applauding a millionaire black actress who is condemning them. She wasn’t condemning us in the movie-going audience. She was condemning them for decades of racism while she’s fondling the Oscar.