A Short History of The Middle East 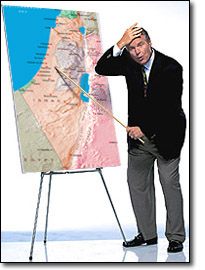 We had two callers on Monday who attempted to defend it, or at least, take it on from a historical perspective, including one Palestinian caller that accused of being the Voice of Israel, which you can hear in the links below. The conversations prompted Rush to dig up a recent column by Mona Charen to share with those having the desire to learn about the real history of all of this.
Charen makes the point that before June of 1967, when Egypt controlled Gaza, and Jordan held the West Bank, neither nation gave the land to the Palestinians for a state because the idea was that they would eventually return to the real Palestine: Israel. It was all predicated on Israel being wiped out. The Palestinians, in effect, were told by their neighbors Egypt and Jordan, “Look, don’t come here, stay in these camps and then go back to your homeland when we have dealt with the Israelis.”
And they’re still in those camps being used as political pawns by those countries because the Israelis have not been wiped out. So you have all of these refugees in these camps. Why do they stay? Well, to answer that, you have to ask who supports them. You have to remember that since the Oslo Accords of 1993, everything has changed because the Palestinians have been living under the sovereignty of the Palestinian Authority, not under any Israeli occupation.

Remember, the Palestinian Authority was set up with Arafat was designated the chief of police, and what has he done to build up the infrastructure? Is there any garbage collection? No. Is there a police department? No. None of the basics of civilized living are in place. He has not built up the region as a prelude to a Palestinian state because that’s never been his desire or purpose.
Right now, the Europeans, for the most part, are supporting the Palestinians in these refugee camps, which is their link to them. In fact, as Mona Charen writes, “The Palestinians are the only people on earth who live on international welfare.” They can’t support themselves. Arafat had a chance because there were efforts to invest in various forms of the infrastructure. Instead, he turned the money into training camps for terrorists.
Charen continues, “In 1948, the United States contributed $25 million and Israel gave $3 million (though the identical number of Jewish refugees who fled Arab states got nothing). All of the Arab nations combined gave $600,000.” They gave nothing. And even still today, Europeans and Americans are supporting the Palestinians in these refugee camps and have been for fifty-four years now.
You talk about a people that have been totally sold out. It’s just an absolute crime. And to this day we will not officially, as part of this government, declare the leaders of these people to be who and what they are ? terrorists. No, we’re going to negotiate with them instead.