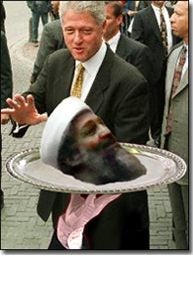 The Clinton administration knew that bin Laden was responsible for several murderous attacks on Americans, and they knew thanks to the 1993 blast that these people wanted to destroy the World Trade Center. Clinton never even went to the site of that first attack. Mr. Clinton did launch missiles at aspirin factories and empty terrorist camps during the Monica Lewinsky grand jury proceedings, but the goal there was to distract the people’s attention from Monica Lewinsky’s testimony, not to get bin Laden.
What did Clinton know and when did he know it? Why did he turn down Osama? Why isn’t the media looking into this versus looking into Bush, who is supposed to be a mind reader, upon learning that some guys are taking flight lessons who happen to be Arab and they might hijack an airplane. Clinton had the perpetrator handed to him on a silver platter and said, “No.” Clinton doesn’t deny the offer was made. Sandy Berger admits the offer was made, but claims that they didn’t have a legal basis for accepting the Sudanese offer.