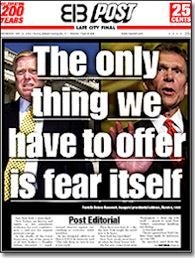 All they can do is call the same old play: fear monger, lie, smear, and make coy accusations of scandal without a of proof. A memo from Democrat staffers on Capitol Hill proves yet again that the party of Franklin Delano Roosevelt has “nothing to offer but fear itself.” Paraphrasing, the memo says that even though we know it’s not true, we’re going to still accuse the Republicans of cutting Social Security because it’s so much fun to watch them react to those false charges.
The Washington Whispers column in writes that an aide to Democratic Congresswoman Marcy Kaptur, “boasts of wrongly hyping an attack on President Bush’s Social Security reform plan. The topic is a draft editorial on the Bush program about which legislative aide Julie Little writes, ‘not entirely accurate.’ Then she adds, ‘Talk about scaring seniors – this may be a little over the top. But it is sooo fun to bash Republicans.'”
They don’t have an issue! That’s what their whole campaign adds up to. To this day they don’t have anything they can point to about themselves that inspires, motivates or urges people to vote for them. They can only paint nightmare scenarios about GOP victory or offer to rob other Americans to give you a freebee. That’s it! The thing is, these attacks don’t stick to President Bush. All they do is terrify little old ladies living on fixed incomes. That’s what Democrats – the among us – think is “sooo fun.”