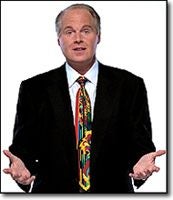 There was a fascinating story by John Crudele in the on Tuesday that really put the tax cut in perspective. “Washington complains about deceptive corporate accounting. But the government last year misplaced an incredible $17.3 billion because of shoddy bookkeeping or worse. Let me put that into numbers so you can fully appreciate the amount. It’s $17,300,000,000 – the price of a few dozen urban renewal projects, a nice size fleet of warships or about half the tax cut that everyone made such a fuss about last summer. Disappeared. Gone. Nowhere to be found.”
So the Democrats want everyone to believe that the tax cut caused the recession – which it didn’t – and caused all kinds of calamity out there with social programs and Social Security and Medicare. But now we come to find out that the government can’t account for $17.3 billion. It’s such an insignificant amount of money compared to the whole U.S. budget of two trillion, but it’s significant as far as the tax cut goes. In fact, it’s half the amount of the tax cut!

Here’s Washington, these holier-than-thou members of Congress, complaining about accounting practices in the private sector and how, “We have to do something!” And in certain circumstances they’re right. But it’s sort of like, “Hey, get your own house in order before you start telling other people how to do it right.”
If they were investigating Enron, they’d be calling people up, demanding they testify about what happened to the people’s money and whose back pocket it went into. They’d be looking for all kinds of corruption and crime. But when they, our great and loyal members of Congress, can’t come up with $17.3 billion because it’s just lost it? “Eh, cost of doing business.” It’s just amazing.