Look For Terrorists, Not Weapons

You’ve heard stories about nuns being pulled out of lines while waiting to go through a metal detector because there’s “suspicion” she might be carrying a pair of deadly knitting needles or something. What are the odds a nun is going to hijack an airplane? Has one ever hijacked or tried to hijack an airplane? 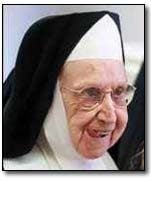 Now, what are the odds that a young, Muslim-Arab male is going to hijack an airplane? They’re pretty good, within the universe of those who do the hijackings. But we can’t publically use that criteria in America because that would be racial profiling. In fact, there is an excellent column related to this by an admitted leftist, Nicholas Kristof, in . He writes as a liberal, saying that we’re going to have to change some of our views on this racial profiling stuff.
Here’s another outrage: the AP reported on Friday that American Airlines chief executive, Donald Carty, said another terrorist attack against commercial airlines was unlikely and urged that some security measures be dropped. There’s an amazing companion story to this about a decorated war hero from Texas who ran into a security problem at San Francisco International Airport because he was carrying a tiny pair of wire cutters – which he needed to cut his wired jaw in case he vomited from in-air bumpiness.

This guy, who was shot in the face while fighting the enemy in Afghanistan, had to surrender the wire cutters and take the risk of flying home without them. This is a classic example of what the Israelis said about how we look for weapons, and they look for terrorists. It also illustrates what Carty said about how we’re going overboard.

We were originally told we’d have about 30,000 federalized security workers, now the number has almost tripled. The doors to the treasury in this country are wide open. We are hiring more people and spending more money, and all we’re doing is confounding the air travel system – and adding more dues-paying union members for the liberals to exploit. I hear horror story after horror story after horror story these days.
I ran into Jim Gray when I went to play golf at Joe Buck’s golf tournament a couple of weeks ago, and he said he had a three-and-a-half hour wait at Las Vegas airport just to get through the metal detectors. He had no other way to go because there was only one entry into the terminal that day. Three-and-a-half hours just to get through the metal detectors! That’s going a little bit too far.