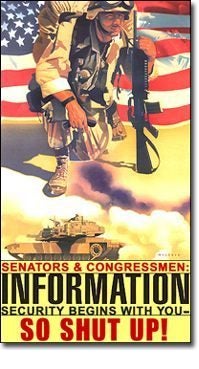 So, guess what they’re doing? The National Security Agency has launched a bunch of ads urging military personnel to protect national secrets during this time of terrorist crisis. They’re going to buy these ads in magazines read by uniformed personnel in the armed forces. The campaign uses dramatic patriotic art of military people at work, and the ads have slogans emblazoned on them such as “Information security begins with you.”
These are public service ads. It is the first time the NSA has ever commissioned an outside ad campaign and this is stunning. It’s mind-boggling to think that we need to spend money on ads to remind our military personnel to keep secrets! They’re the only ones left in the government that do keep secrets.
I’ll tell you where we need to send these stupid ads. We need to send these ads to the Senate intelligence committee and the Senate judiciary committee, chaired by Patrick “Senator Depends” Leahy – Washington’s number one leaker. It’s members of Congress that need to see these ads, not the uniformed military people. If the NSA knows what it’s doing, it’s going to arrange for complimentary copies of all these publications to be sent over to members of Congress on Capitol Hill.