RUSH: To Portland, Oregon, next. Hello, Chuck.
Chuck: Hey, Rush. Mega dittos.
RUSH: Thank you, sir.
Chuck: Hey, I’ve been following the global warming thing, and I just wanted to weigh in on it for a minute if I could with you.
RUSH: By all means. Of course, sir. 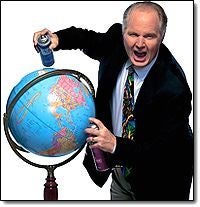 Chuck: First of all, you liberals out there, we know who you are. We know about the Pew Foundation. We know about all the money that’s being spent to brainwash the public on this issue of global warming. But I’ve been in the business for 30 years.
I study this stuff all the time, and in order for these people to make their claim about global warming correct, they have to be able to demonstrate that the radiation balance coming from the sun and what goes out from the earth is NOT in balance. And the satellites we had up there now for over ten years have shown and continue to show today that the radiation balance of the planet remains as it was years ago, when satellites were first put up.
RUSH: What does that mean?
Chuck: It means that carbon dioxide and the greenhouse gases that these people claim are warming the planet are having little-or-no effect in the heating or cooling of the planet whatsoever.
RUSH: Well, now, wait. This confuses me, because it’s now the official policy of the EPA, the U.S. government and the United Nations that there is this warming and that human beings are responsible for it.
Chuck: Well, I don’t know where they get the human beings responsible for it, because it’s just not true.
RUSH: I’ll tell you where they get it – and Karl Rove said this to me when I was on the phone with him a couple days ago. They tracked it from the Industrial Revolution, and they said that the amount of greenhouse gases in the atmosphere is obviously much higher now than it was in the pre-Industrial Revolution days.
Chuck: Well, what does much higher mean? It has very little significance on the total gas composition of the atmosphere, and everything I learned when I was in undergraduate school about the radiation balance and the effect of these gases [is] that they’re insignificant unless they multiplied many, many hundreds of millions of times over. And, you know, we have this warmer winter this last year in the eastern United States and this is what these people have been hammering on –
RUSH: Chuck, I’ve got to ask you a question. You’re speaking as a scientist, correct? You’re a meteorologist?
Chuck: That’s correct.
RUSH: Okay, you’re looking at this data as a scientist. How in the world can there be such disagreement over this – this scientific data that you are so certain about? Where is the room for scientific disagreement? I can see political disagreement, but where is the room for scientific?
Chuck: There shouldn’t be any disagreement scientifically on this. What’s happening is, the models which these people use to project climate change are being used to make these assertions, and the models are just dead wrong. When I was going to undergraduate school in the 1970s we had a scientist then that was telling Congress – when this global warming thing started – that if we didn’t do something according to his model, to control the greenhouse gas emissions that by the mid-1990s the mid-latitude food belt of the United States would become desert wasteland.
RUSH: Was his name Paul Ehrlich?
Chuck: No, it was not. It was not. That was not who he was.
RUSH: I just saw something in the paper this morning about El Ni?o. The National Weather Service and the National Oceanographic – whatever it is – is looking at El Ni?o, and it happens every five years, the warming of eastern Pacific Ocean waters. And they are saying that it’s still too soon to say how serious an impact this latest round of El Ni?o is.
What happens is that every five years, it gets bad, and that for 18 months, weather is affected around the world, and in different regions of the United States it’s either dryer and cooler or wetter and warmer, or a mixture of those things. But the thing that struck me about it was that here are a bunch of people on the one hand predicting global warming 20, 30, a hundred years out, and yet we know that El Ni?o is happening, but we can’t now be sure, they say, how bad this El Ni?o is going to be, even though it’s going to be at its full force, whenever that is, in the next six to nine months.