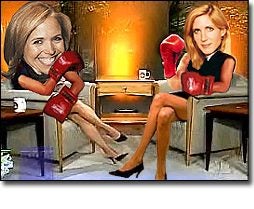 What made the interview so riveting was the fact that Couric basically exemplified everything Coulter writes about in her book.
It was a classic example, being played right off the pages. Of course, Couric attempted to downplay and flat out deny an example of her own bias concerning Ronald Reagan – an episode Coulter covers in the book.

We say “attempted” because the Media Research Center did some digging after the interview to find out the real deal behind the accuracies and inaccuracies of their argument, and lo and behold, it looks like Couric is down for the count. She did try revive herself by going for the jugular and getting personal, enquiring about such things as Coulter being dropped as columnist from National Review Online. However, I only think it served to prove the book’s point more.
The wasn’t the only hot seat Coulter sat in Wednesday morning. She also appeared on MSNBC, and again, the whole line of questioning by the host was just so typical of the erroneous criticism of the right. Even my name was brought up in the interview.
You can hear excerpts from the programs in the links below, along with the final score provided by the Media Research Center, and my own recollections of an experience I had with Ms. Couric during an interview.