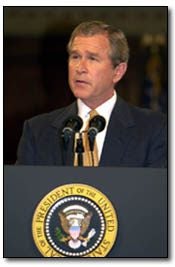 On Wednesday, the White House said that Bush is standing strong behind his proposal for Social Security investment accounts, calling it the right long-term policy, even as tumbling stock markets and corporate scandals ravage the retirement plans of many workers.
As you know, Democrats have stepped up an election year effort to raise voter concerns over what they derisively call Bush’s push to privatize Social Security. Now, there are two things about this. First, Social Security is an accounting gimmick from the get-go. It’s fraud, designed as fraud, and it’s going to go bankrupt in 2017 without a massive tax increase that’s going to destroy your kids’ and grandkids’ future.
However, the people responsibly dealing with this want to establish a means of privatizing a portion – 2% is the proposal the president has on the table. It has to be done, folks. It will put you in more control of your retirement. No wonder the Democrats are opposed to it. They don’t want to lose control of your retirement!