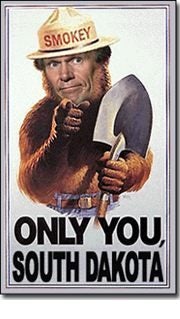 The idea here was for Daschle to help Senator Tim Johnson (D-SC) fend off an election challenge from Congressman John Thune (R-SD) in November. You didn’t hear about this hypocritical logging exemption anywhere else, nor did you hear about how the hypocrites at the Sierra Club – who masquerade as advocates for the environment against all of us who hate it – continue to run ads against Thune for supporting that Johnson’s mentor Daschle has just sneaked into the supplemental defense spending bill. It’s a cover-up Daschle’s counting on no one noticing, as we prove is the case in our story on the pass he gave bribe-taking New Jersey Senator Robert Torricelli.
Daschle allows the thinning of forests in the Black Hills expressly to prevent forest fires, and puts South Dakota at odds with the stated goals of the Sierra Club and similar groups. They’ll scream bloody murder if California, Arizona, Oregon or any other state out west tries it, but to keep a liberal, socialist, illegitimate Senate majority, the silence is deafening. Well, guess what? Republican and Democrat senators now say they’re going to aggressively pursue legislation to allow the thinning of trees in their own state forests. This is an all-out assault on the environmentalist wackos – and it’s a good thing, ultimately.