Everybody’s been so brainwashed into thinking tobacco is as evil as any substance known to man. People who can’t even smell a cigarette from 200 yards away demand that people 400 yards away not smoke because they’ve just been talked into it. This biotech company in Vacaville, California – where Charles Manson used to be holed up – say that they have completed test on humans of the non-Hodgkin’s lymphoma drug and will proceed to the second phase. 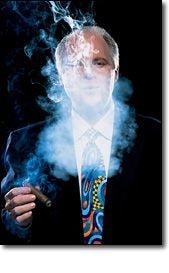 The company is hopeful for commercial release of the product buy 2005. It may be the first cancer therapy genetically tailored to individual people. So put that in your discrimination pipe and puff on it. There was another story once, which headlined that cats can be seriously harmed by secondhand smoke. But if you read deeper, you learn that cats don’t get lung cancer, or very few of them do. Nobody knows why except God.
Nevertheless, you should have seen the e-mails I received. You’re going to freak out over this, but it’s a fact: my cats love secondhand smoke. When I smoke a cigar, they’re on me as though I’m Purina Cat Chow. They’re the cutest little things – and no, they’re not addicted.
A woman called me on Thursday and said that her 15- and 18-year-old cats have lived around secondhand smoke all those years, and they’re doing just fine. She then said her mother-in-law is bothered more by the smell of animals than by the smell of smoke. You can puff away like a chimney, and cover up the smell of the animals and be just fine – or get rid of your mother-in-law. Who needs her if she doesn’t like cats?