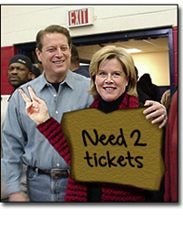 They thought they were to freebies, but it didn’t work out. Roger Friedman of Fox News writes that Tipper “was told even paid admission would be hard to come by.” Freidman’s source tells him that Springsteen was finally badgered into making some tickets available to the whining, self-embarrassing Gores, but insisted they pay market price. “They wound up being offered four,” says the source. “But when they were asked to pay $75 apiece, they said forget it. And you know, that’s why Gore isn’t president, in a nutshell.”
You go to a Springsteen concert, you pay for it – if you’re one of “the people,” anyway. Springsteen and E-Street aren’t out there playing for free. Yet the Gores refused to pay the $75! I guess they didn’t want to see Springsteen that badly, much less reward whatever loyal staff members have stayed linked up to this fallen star. Imagine the mind that thinks Bruce Spring should perform free for them. Heh-heh-heh. That’s what Joe Piscopo said – Springstein – singing as Frank Sinatra. He was “praising” other, newer and less legendary singers, but clearly not knowing or caring who they were. Anyway, it’s just another case of supposedly do-gooder, fairness liberals having one set of rules for the rest of us and another set for themselves and the elite.