The took this up for the second day in a row. Mike Allen covers Bush for the paper, and he obviously detests this president. You can hear me read from and comment on his vitriolic column in the audio link below. Allen writes, “President Bush’s recent vow to crack down on federal spending faces an immediate test in South Dakota, where he is rebuffing pleas for drought aid even though they come from the Republican nominee in a crucial Senate race the president keenly wants to claim.” 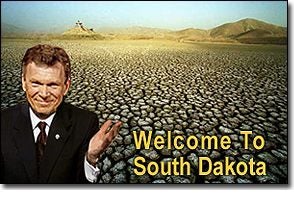 The story has it all wrong. This drought throughout the plains states and elsewhere has been going on for several years. It didn’t just start this election cycle. Now, there’s a very powerful man in South Dakota. His name is Tom “Puff” Daschle and he’s the all-powerful illegitimate Senate majority leader. He controls what bills come to the Senate floor, and he obviously has had other priorities. He’s the one who didn’t have time to pass a prescription drug bill to help you seasoned citizens. He loves this drought, because he thinks he can blame it on Bush.
In fact, the only bill he had time for wasn’t to help anyone ? other than his wife and the airline industry she works for as a lobbyist. We’re paying rich farmers not to do their work because they have excess crops. Daschle is also trying to blame ? of course ? the Bush tax cut that hasn’t even taken effect yet. The truth? The deficit this year is said to be about $160 billion, and these rebates are said to have cost, so far, $50 billion. Do the math, Senator ? or simply listen to Rush join the president’s comments in progress below. You may learn something.