“The truly and deliberately evil men are a very small minority; it is the appeaser who unleashes them on mankind; it is the appeaser’s intellectual abdication that invites them to take over. When a culture’s dominant trend is geared to irrationality, the thugs win over the appeasers. When intellectual leaders fail to foster the best in the mixed, unformed, vacillating character of people at large, the thugs are sure to bring out the worst. When the ablest men turn into cowards, the average men turn into brutes.” 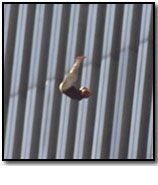 This point is quite appropriate today. What makes tyrants powerful are the Neville Chamberlains and European Unions and the Bush 41ers of the world who look at evil and refuse to see it. For example, the TV networks will not replay pictures of the airplanes flying in the towers when 9/11/02 comes around, and no print publication will show us stills of people jumping from the top floor ? but we will, folks. We want you to see what these people did so can look at Evil and call it Good.
The appeasers don’t want to be confronted with images of people on the 84th floor jumping to escape the flames. The existence of this evil is so frightening and unbelievable, they’re unable to face it. But turning away from images of evil doesn’t mean it can’t happen all over again, or that there’s no connection to Iraq. In fact, turning away makes it even more likely that people will die in horrible ways like this again.
It makes it more likely that someone out there – maybe you – will have to look down 1,300 feet and chose to jump. Some of us want to do all we can to make sure that no American ever has to stand on that ledge and face that choice again. Others want to have the luxury of putting their faith in appeasing Saddam to make sure it never happens again. Who do you think is right?