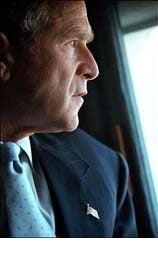 We have no empire. We do not invade or annex. We liberate. Despite the talk of the resources we use, we use those resources to feed, clothe and protect the world. When Nelson Mandela or one of these terrorists sees America, they ask, “How did they do this in less than 230 years? We’ve been around here for centuries, and we still can barely muster working toilets.” It is this that the terrorists see, folks ? and it makes them envious.
Yes, envy. They look at the U.S. and see what they thought they were supposed to become. That’s what they thought their religion promised them. I’m not speaking of all of Islam here or Muslims in general. I’m speaking of the militant extremists, particularly from the Wahabi sect, who looked at those towers and said, “How did they do that when we can’t even pave a road?” If I were a citizen of a country that had been around thousands of years, and was still basically a sand pit, when I looked at America, I would want to come here, not to tear this country down.