The United States has no quarrel with the Iraqi people, who have suffered for too long in silent captivity. Liberty for the Iraqi people is a great moral cause and a great strategic goal. The people of Iraq deserve it and the security of all nations requires it. Free societies do not intimidate through cruelty and conquest and open societies do not threaten the world with mass murder. The United States supports political and economic liberty in a unified Iraq. 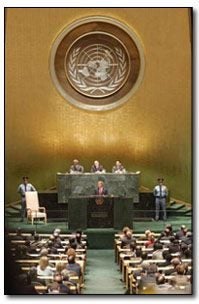 We can harbor no illusions. Saddam Hussein attacked Iran in 1980, and Kuwait in 1990. He has fired ballistic missiles at Iran, Saudi Arabia, Bahrain and Israel. His regime once ordered the killing of every person between the ages of 15 and 70 in certain Kurdish villages in Northern Iraq. He has gassed many Iranians and 40 Iraqi villages.
My nation will work with the U.N. Security Council on a new resolution to meet our common challenge. If Iraq’s regime defies us again, the world must move deliberately and decisively to hold Iraq to account. The purposes of the United States should not be doubted. The Security Council resolutions will be enforced ? the just demands of peace and security will be met ? or action will be unavoidable. And a regime that has lost its legitimacy will also lose its power.
Events can turn in one of two ways.
If we fail to act in the face of danger, the people of Iraq will continue to live in brutal submission. The regime will have new power to bully, dominate and conquer its neighbors, condemning the Middle East to more years of bloodshed and fear. The region will remain unstable, with little hope of freedom and isolated from the progress of our times. With every step the Iraqi regime takes toward gaining and deploying the most terrible weapons, our own options to confront that regime will narrow. And if an emboldened regime were to supply these weapons to terrorist allies, then the attacks of September 11th would be a prelude to far greater horrors.
If we meet our responsibilities, if we overcome this danger, we can arrive at a very different future. The people of Iraq can shake off their captivity. They can one day join a democratic Afghanistan and a democratic Palestine, inspiring reforms throughout the Muslim world. These nations can show by their example that honest government, and respect for women, and the great Islamic tradition of learning can triumph in the Middle East and beyond. And we will show that the promise of the United Nations can be fulfilled in our time.
Neither of these outcomes is certain. Both have been set before us. We must choose between a world of fear and a world of progress. We cannot stand by and do nothing while dangers gather. We must stand up for our security, and for the permanent rights and hopes of mankind. By heritage and by choice, the United States of America will make that stand. Delegates to the United Nations, you have the power to make that stand as well.
Thank you. (Applause)