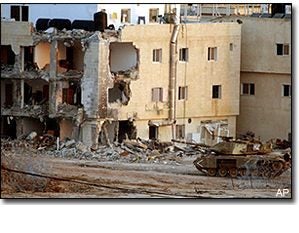 No, it’s not. This isn’t even a speed bump. The Israelis are showing us how it’s done. Everybody is saying, “This is only going to make Arafat more popular in the street,” and everybody has this wrong.
When you get shellacked, when your headquarters are torn apart and you’re left so powerless you’re forced to use plastic bags like a hobo instead of the toilet, you’re going to lose respect among the people before long. The action taken against the suicide bombing leaders ? Hamas and Islamic Jihad – has worked as well. Now, the Israelis are just letting it fly against Arafat.
CNN had the best camera angle of this action against Arafat’s compound. They actually had the machine gun and the mortar fire hitting the side of the building, with the ricochets and the sparks and everything. But folks, I could swear that CNN enhanced the sound when they ran the replay. Now, sure, I’m listening with a cochlear implant patched in, but it was as loud as it could be on videotape, much louder than it was live.
Did they doctor the audio? After all, the Israelis are very close to taking CNN off their cable systems, because of CNN’s pro-Arab bias. The bias is there for one simple reason: there are far more Arabs over there who might want to watch CNN on cable than there are Jews, and everything is about business. You’re going to please your Arab customer base if you’re a little harder on the Israelis than you are on the Arabs. That’s what explains it.