Arabic Newsweek: Get Saddam Out of Here 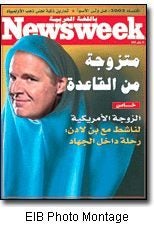 Mohammed Al-Jassem debunks the weak-kneed conventional wisdom that an attack on Iraq will ignite a “firestorm” (or other clich?) in the Middle East and worldwide. In fact, he suggests the outcome will be just the opposite. Al-Jassem says that we can have seminars on why the world hates us and why Saddam is bad all day long, “But only an actual invasion of Iraq and the overthrowing of Saddam would produce a radical shift in public opinion, changing the terms of the reference of the public debate.”
This is what I have been saying, coming from a guy on the ground somewhere for Newsweek in the Middle East. Those people may say publicly that we shouldn’t touch Saddam, but they all want him gone. He’s a menace to everybody. They can’t say so out loud, of course. They must foment anti-Americanism publicly to keep their populations happy because their own governments are so ineffective, repressive and brutal.
Al-Jassem concludes, “The Arabs need shock therapy, some kind of tremor that would bring them back to reality, and away from their political dreamscape.” He cites Egypt’s loss in the 1967 as providing such a shock, and says that while some populations may scream if we attack, that will actually be good. It will force these dictatorships to deal with their radicals instead of coddle them. “The Saddam shock will end an Arab era that has spanned more than 50 years beginning with the war of 1948 against the newly created state of Israel.” Right on, my friend. Let the eagles fly!